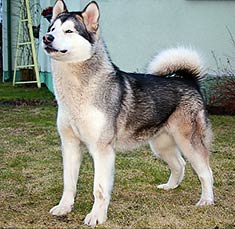 The Alaskan Malamute, developed to haul heavy loads, is is a large, powerful, heavy-boned dog with a thick double coat. He has a balanced, steady gait. A friendly dog breed, the Alaskan Malamute does not make an effective guard-dog. 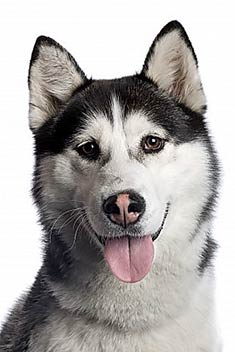 The Alaskan Malamute originated in Alaska.

Alaskan Malamutes range from 75 to 125 pounds.

Alaskan Malamutes are typically white with either black, red or gray shadings. This dog breed also has an off-white undercoat.

Alaskan Malamutes have thick coats with a course outercoat and a dense undercoat. This dog breed is prone to heavy shedding and requires brushing at least twice a week.

The Alaskan Malamute is a friendly, good natured dog breed who is usually good with children and strangers. Self-assured and strong-willed, this dog breed tends to be very stubborn and early obedience training is a must.

The Alaskan Malamute is susceptible to hip dysplasia, chondrodysplasia and eye problems.

The expected life span of the Alaskan Malamute is 10-12 years.

Alaskan Malamutes need lots of space. A house with a large fenced yard with some shade is essential for this dog breed.

The Alaskan Malamute is in the Working group.

Who didn’t love the movie “Eight Below”, the 2006 tearjerker story of an Antarctic expedition forced to leave their sled dogs behind when they abandoned their camp? The canine stars of the show, a team of sled dogs, were made up of both Huskies and Malamutes. 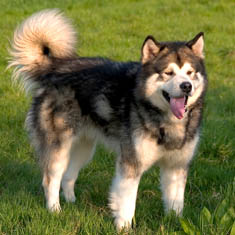 The uninformed may mistake the larger Malamute for a Siberian Husky, but they are actually quite different breeds. The Husky was bred for speed, and is small and compact. The Malamute, on the other hand, was bred to haul freight, so the hallmark characteristics include power and endurance. Another important difference is that Malamutes always have brown eyes, while Huskies may have blue, brown, or one of each.

To confuse the issue further, the mascot for the University of Washington Huskies, is actually an Alaskan Malamute!

The Alaskan Malamute is the oldest of the Arctic sledding breeds, developed as long as 2000 to 3000 years ago. A tribe of Inupiat in northwestern Alaska named the Mahlemut is the genetic ancestor of the modern Malamute. The original dogs were known for hunting predators as large as bears, as well as helping the tribe find seals by alerting to their blow holes in the ice.

Malamutes helped Rear Admiral Richard Byrd reach the South Pole and hauled gear for miners who came to Alaska in 1896 during the Klondike Gold Rush. In addition, Malamutes were used as search and rescue dogs in Greenland during World War II.

The AKC breed standard for the Alaskan Malamute describes a double coat composed of an oily, woolly undercoat and an outer guard coat which together provide protection from the harsh weather elements above the Arctic Circle.

Colors range from light gray to black or from sable to red. Malamutes often have facial markings including a cap on the head and a mask on the face. The nose and the gums are black although a snow nose, black with pink undertones that gets lighter in cold weather, is not uncommon.

There is a relatively wide range for weight for the Malamute, with males weighing in much heavier than females. Females usually top out at about 75 pounds, while males may be above 100 pounds. These dogs usually stand between 23 and 25 inches high at the shoulder. 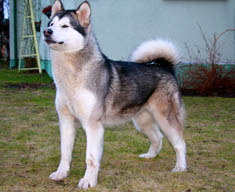 Alaskan Malamutes usually stand between 23 and 25 inches high at the shoulder and weigh about 100 pounds.

The tail of the Malamute deserves some special mention. Although like all Spitz dogs, the Malamute’s tail is very furry and is carried up over the back, it should never be a corkscrew, as is seen in its cousin the Akita. The tail actually becomes important in cold, snowy weather, when it is wrapped around the dog’s nose to provide an extra layer of protection.

The Malamute is a working dog meant to drag small-ish loads across long distances. They are not particularly fast, but they do have great endurance. Their usefulness doesn’t just stop with work, however, as they also can make a great family dog for the right family.

These dogs are fiercely independent and very smart, which can make training a challenge. Positive motivation works best with Malamutes. Being trained actually goes against the genetic tendencies of the dog which were meant to keep them alive under the harshest environmental conditions known to man or beast. Free-thinking and resourcefulness have been bred into Malamutes to allow them to survive the Arctic winters. Patience is required for training, and you shouldn’t expect that the dog will ever obey your every command.

Malamutes have natural hunting instincts, which may make them dangerous to small animals like rabbits, squirrels, and even your household cat. They would probably be best in a home with no cats and with dogs only of larger breeds.

Malamutes aver very fond of people, all people. This includes not only your family, but your friendly, neighborhood burglar, as well. They are not meant to be watchdogs. They are naturally quiet, but will occasionally howl like a coyote or a wolf.

Because they were bred to be workers, Malamutes require lots of exercise. You’ll need a large outdoor space where they can run every single day. In the summer, they have a hard time keeping cool, so you will want to provide them with a baby pool or pond in which to cool off. 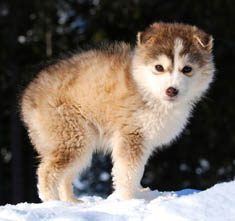 The average Malamute will live somewhere between 10 and 15 years, with the most common cause of death being cancer. Health problems you may encounter with your Malamute include hip dysplasia, epilepsy, congenital heart problems, kidney problems, and skin problems. In addition, a growing number of Arctic dogs are developing diabetes in middle age. This problem is most frequently seen in the Samoyed, but is worth mentioning for all Arctic breeds.

Malamutes may develop hot spots which can often be treated at home with Gold Bond Medicated Powder, Desenex, or HartzSufodene. If home treatment is not successful, seek veterinary care promptly, as hot spots can grow and become quite painful in very short order.

The extremely thick coat of the Malamute requires daily brushing, both to reduce matting and to inspect the skin for any problems. Mats can cause fungus to multiply, causing skin irritation. Brushing removes loose dirt from the coat while spreading oils from the skin along the hair shafts to keep the coat shiny. You might also want to rub the dog with a chamois to bring out the shine of his or her coat.

A bristle brush or slicker should be used on the Malamute. A rake can be used to pull out the undercoat during shedding season. However, the Alaskan Malamute Club of America recommends that the Furminatorbrand of de-shedding tools not be used on this breed because it cuts through the outer coat of guard hairs.

Bathing the dog is recommended every 6 – 8 weeks, and it is critically important to make sure the coat is dried thoroughly to prevent the growth of fungus. Failing to follow the recommended grooming schedule of daily brushing and bathing every couple of months can result in your dog’s coat becoming so matted that your only recourse is your dog bald. Although shaving solves the matting problem, it can create other problems including causing the dog to have trouble regulating his or her temperature. Windburn and sunburn are also problematic for shaved dogs. Shaving disrupts the fur’s seasonal growth cycle and will alter both the color and texture of the coat. Finally, shaving leaves dead hair shafts behind, which can irritate your dog’s skin.

If you’ve got the experience to properly train an independent-minded dog and the time in your schedule to deal with grooming and exercise, this beautiful dog may be just the one you’ve been looking for!