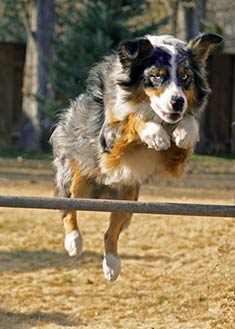 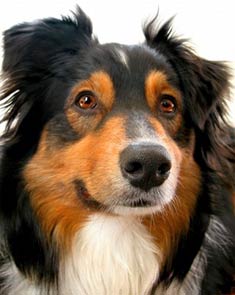 The Australian Shepherd originated in the United States.

Australian Shepherds have a double coat that can be either straight or wavy. This dog breeds coat is medium-length and requires minimal grooming.

The Australian Shepherd is susceptible to hip dysplasia, blindness and deafness.

The expected life span of the Australian Shepherd is 12-15 years.

Australian Shepherds need frequent exercise and therefore do best in a house with a fenced yard.

The Australian Shepherd is in the Herding group.

Quick Quiz: Where did the Australian Shepherd originate? If you said Australia, surprisingly you'd be wrong!

History of the Aussie

During the Gold Rush in the Western United States in 1849, many people came to test their luck at getting rich quickly. With these people came their dogs, and often their livestock. Some of the groups that came were the Spanish Basque sheep herders and the Australians, who also brought sheep. It is thought that the Australian Shepherd developed as a cross-breed between the Spanish and Australian dogs used for herding.

These early Western settlers needed a dog who could keep the herd together, protect them from predators, and work on remote ranges under the hot desert conditions as well as in the cold, rough mountainous conditions. Although the dogs from Spain were well-suited to keeping the herd together, the Australian dogs were used to the terrain and weather conditions. Selectively breeding the two gave rise to a new dog with all of the qualities being sought: speed, athleticism, energy, endurance, intelligence, flexibility, independence, obedience, and the ability to handle severe weather.

In addition to performing their duties in the field, Australian Shepherds were popular in the 1950's as performing dogs in rodeos, horse shows, and in several Disney films, which is how the breed grew to become popular throughout the United States.

The Australian Shepherd Club of America was formed to promote the breed and set standards for breeding in 1957. The members of the club were more interested in the dog's performance than in its looks, and did not seek membership in the American Kennel Club.

However, some members felt that show conformance was important, and broke off from the ASCA to form the United States Australian Shepherd Association with its own breed standard. This group did seek membership in the AKC, with the first registration being in 1993, the 135th breed to be recognized.

The breed has subsequently been bred to smaller sized dogs, sometimes referred to as varieties of the original breed, although some think they should be entirely unique breeds. The Miniature version weighs between 17 and 35 pounds, standing 14 - 18 inches tall. The Toy version wighs just 12 - 15 pounds. All other characteristics of the smaller versions are the same as are seen in the full-sized breed.

The full-sized Australian Shepherd is a medium-sized dog ranging in weight from 40 - 65 pounds. Males usually stand about 20 - 23 inches tall, while females are slightly shorter at 18 - 21 inches.

Depending on whether the dog was bred for field work or show, the animal will bear distinct differences. Show dogs have longer, fuller coats with more white coloring. The coat requires weekly brushing to detangle and condition the fur, as well as to remove dirt. In addition, show dogs have heavier bone structures than field dogs who must run all day long.

The coloring available for Aussies encompasses a wide range, including black, red (or liver), blue merle (black marbled with grey), and red merle (red marbled with buff or silver). In addition to these base colors, a dog may also have copper or white markings on the face, chest and legs. However, dogs with excessively white faces and ears are prone to sunburn and subsequent skin cancer problems. In addition, dogs with white ears are prone to a disease known as white-related deafness.

Because of the genetics involved in producing the distinctive merle coat associated with Aussies, it is a bad idea to breed two merle dogs. The combination results in a 25% likelihood that a puppy born to two merles will be all white with blue eyes. Although these dogs are beautiful, they are often deaf and blind.

The tail length of the Aussie is also variable, although in countries where docking is allowed, the tails of working dogs are usually cut short to avoid injury in the field.

Activities for the Australian Shepherd

Although these dogs were originally bred solely to herd sheep, their high intelligence and endurance have led to their success at a variety of dog sports including agility, flyball, and Frisbee. They have also been trained in search and rescue, as well as for use as service and therapy dogs. Finally, they make great companion dogs for those who prefer to just enjoy a dog without making him or her work. With companion dogs, care should be taken to ensure that the dog is given enough exercise and mental stimulation to keep him happy.

These active dogs are very loyal and devoted, but can be a handful if not kept busy. If you don't provide a game, the dog will think of one himself. Their herding instinct is so strong that they will herd anything they come across including toys, small animals, and even children, nipping at their heels when it is time to go to bed. Herding also requires guarding the livestock, and these dogs will warn you when someone enters your property.

These dogs have a tendency to become destructive when they are bored, making a crate a very necessary accessory to contain the dog when you are away from home.

Are there health concerns with the Aussie?

Aussies live an average of 12 - 13 years, but they can be plagued by back and hip problems, bladder infections, and epilepsy.

Like many medium-to-large active dogs, hip dysplasia can be a problem in Australian Shepherds. Before breeding, both parents should be checked and certified by the Othopedic Foundation for Animals (OFA) as clear of any joint malformations which may be passed on genetically. In addition, careful breeders will have the dogs' eyes checked by a veterinarian certified by the Canine Eye Registration Foundation (CERF) to check for possible eye concerns.

Like their close relatives the Collie, Aussies may carry a gene that makes heartworm preventatives and other drugs toxic. Genetic testing can determine whether or not your dog carries the mutated multi-drug resistance (MDR1) gene, which indicates that the dog will not be able to clear certain drugs from his system, resulting in a build-up that eventually becomes toxic. Other drugs that may cause problems include loperamide which is prescribed for diarrhea relief and acepromazine which is sometimes used for anesthesia.

Even if you don't treat your dog with one of these medications, dogs may get a hefty dose if they eat the feces of treated animals. If your dog is prone to cleaning up after livestock or other pets, make sure you check the medications that these other animals are taking to prevent a problem in your Aussie.

Is the Aussie the right breed for my family?

Aussies are truly people oriented. They want to go everywhere and do everything with you. If you cannot devote a lot of time and energy to your dog, you should probably look for another breed. However, if you want a fun-loving dog that is easy to train and housebreak and excels at many different activities, the Aussie may be just what you are looking for. This dog is a medium-shedder, meaning that some loose hair falls out regularly through-out the year, without seasonal blows of the entire coat.