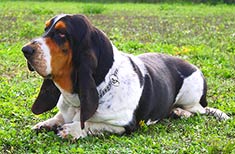 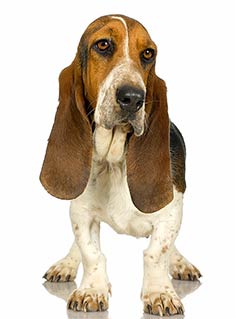 The Basset Hound originated in France.

Basset Hounds range from 40 to 60 pounds.

Basset Hounds are typically black, white and tan, but could be lemon colored.

The Basset Hound is a good natured dog breed who gets along well with other pets and children. Basset Hounds are not as easy to train as some other breeds but good results can be achieved with patient and consistent training.

The Basset Hound is susceptible to ear and skin infections and obesity, which can cause spine and leg problems.

The expected life span of the Basset Hound is 8-12 years.

Basset Hounds do well in both houses and apartments. Exercise is a must for the Basset Hounds in order to prevent obesity. However, joggers should not consider this dog breed because extended running could damage the dog's hips, legs and back.

The Basset Hound is in the hound group.

Sad hound eyes. Massive ears and feet. Doleful baying. Who could it be other than a Basset Hound? 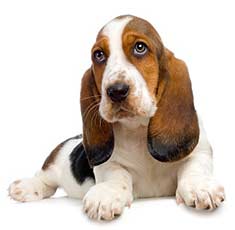 How did the Basset Hound originate?

The Basset Hound’s origins go back at least 500 years, having been shown in a hunting textbook as early as the mid-16th century. The breed originated as a cross between the Bloodhound and the Basset Artisien Normand, one of six recognized French Basset breeds. Bassets were brought to the United States by the Marquis de Lafayette as a gift to George Washington. The breed was first recognized by the American Kennel Club in 1885, and the current breed standard was adopted in 1964.

Basset Hounds were selectively bred to have short legs, making it easier for hunters to follow them on foot as they chased badgers and rabbits into their dens. Still today, the main use of the Basset is for hunting rabbits, with Bassets rating second only to Bloodhounds in their accuracy as scent hounds.

Is the Basset Hound a popular dog?

These ungainly hounds are amazingly popular and have devotees the world over. Once you’ve heard a Basset baying, you are generally hooked for life. In many communities, Basset Hound events draw huge crowds and are often used to raise funds for rescue groups. Some of the largest events in America are the Michigan Basset Waddle and the New Orleans Basset Boogie. In addition to crowning a king and queen, these events often choose a dog with the best waddle, longest ears, or best bay.

Does the Basset Hound have a good personality?

The Basset is one of the world’s most gentle dogs. They are very calm, and they love human companionship. Neither overly dominant nor overly submissive, the Basset is usually well-behaved, but easy to spoil. The dog is great with adults, children, and other animals, and makes a terrible watchdog as he never met a stranger.

Given his druthers, this 60 pound dog would spend his life on your lap. He is notoriously stubborn, and his hearing is almost as selective as the average teenager’s. The Basset values companionship and will not do well left alone for long periods of time. If you can’t be there with him, you might want to adopt another dog to keep him from getting lonely.

Given his origins as a scent hound, the Basset requires a sturdy fence or leash to keep him from following his nose into trouble. When he isn’t chasing a scent, the Basset is perfectly content to laze around in the sun. Because of this, weight gain is often a problem, and daily walks are required to prevent obesity. 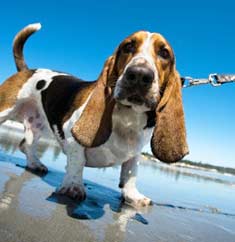 They may enjoy a walk on the beach, but the Basset Hound isn't much of a swimmer.

Can my Basset Hound swim?

Although most hunting dogs love the water, the water doesn’t love a Basset. His heavy body, combined with those short little legs, makes it very difficult for a Basset Hound to swim more than a very short distance. If you take him boating, make sure to provide a flotation device, and if he falls into your pool, show him the way to the stairs so he learns how to get out.

The adult dog weighs 50 – 65 pounds and stands 12 – 15 inches high. He is short-legged and heavier-boned than any other breed of dog. His short hair sheds only a little, and is acceptable in any hound color. The most common color is black, white, and brown, known as tri-color, although red and white or lemon and white are also seen frequently. Blue (really grey) Bassets are acceptable, but undesirable because the color is associated with many genetic defects including periscoping intestines, skin allergies, and food allergies.

The ears of a Basset are his most distinctive feature – long, velvety, and hanging in loose folds. These long ears do serve a purpose other than beauty; they drag scents from the ground in towards the dog’s powerful nose, aiding him in finding his quarry. The folds of skin under the chin, called the dewlap, as well as the wrinkles around the head and face also aid in trapping scents.

Where have I seen Bassets? 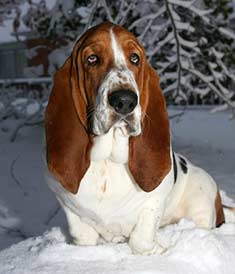 Because of their comical good looks and stately presence, Basset hounds have a long history in movies, television, cartoons, and advertising. Some of the more famous Bassets are the cartoon characters Droopy Dog and “Bloom County’s” Rosebud. Fred, the truck-driver’s companion in the Smokey and the Bandit movies was a Basset, as was the dog owned by Sheriff Rosco P. Coltrane in The Dukes of Hazzard series. Hush Puppies shoes have used a Basset in their advertising for years.

Do Basset Hounds have any major health problems?

Bassets live an average of about 12 years, with most of them succumbing eventually to cancer or old age. Their long backs make them susceptible to disc problems, particularly if they are overweight and are not discouraged from jumping on and off of your furniture.

Basset Hounds may also suffer from von Willebrand’s disease, a genetic problem which causes bleeding, similar to hemophilia in humans. Other health problems include elbow dysplasia and gastric torsion or bloat.

Paneosteitis is sometimes seen in young Bassets. This disease causes sudden lameness that wanders from limb to limb. There is no specific treatment for the disease, as the dog usually grows out of the condition by the age of 2 years. Problems arise when vets don’t realize why the dog is lame and perform unnecessary exploratory surgery.

Although not technically a health problem, drooling is prevalent in this breed. Prospective Basset guardians need to be aware that they will have to put up with a bit of a mess, particularly when the dog is drinking. One of the major reasons why Bassets are given up is because their families are not prepared for the slobber that comes with these dogs.

How much grooming with I have to do with my Basset?

Other than keeping a slobber rag handy, you will not have to do much to maintain your hound. The coat is pretty much wash and wear, requiring nothing more than occasional brushing. Nails should be trimmed monthly to allow the dog to carry his heavy body correctly without foot pain. 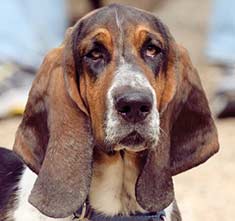 The only special care required for the Basset Hound is ear cleaning. The long heavy ear flaps do not allow moisture to evaporate from the ear canals. The ears should be swabbed out at least weekly with a cotton ball soaked in alcohol. If you notice an odor coming from the ears, the dog may need veterinary care for an ear infection.

Is the Basset Hound the right dog for me?

The Basset fits wonderfully into just about any home setting. Other than his need for some companionship, this hound dog will be happy to conform to any situation including kids or other pets in the home. He does not require a large home, but does need to be securely confined when outside to keep him out of trouble. If you are looking for an easy to groom and easy to get along with dog, the Basset just may be a great fit for you!