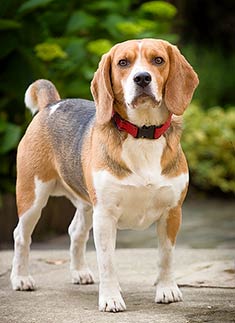 The Beagle follows its nose wherever it goes and was bred for the hunt - which means baying, howling and barking. When on scent, this tenacious dog breed will block out everything around it - including you. Their charming, upbeat personalities make them excellent family pets. Snoopy, created by the late Charles Schultz, is perhaps the world's most recognized (and loved) Beagle. 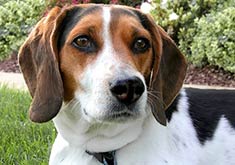 The Beagle originated in England.

Beagles may be a combination of the hound colors and are typically white, black and tan.

Beagles have a short, hard coat. Minimal shedders, their shiny low-maintenance coat is easy to care for.

The Beagle has a cheerful, upbeat personality and is great with kids. Like all scent hounds, Beagles are an independent breed and will always "follow their nose" - ignoring your protests to come back.

The expected life span of the Beagle is 12-15 years.

Beagles need companionship and daily exercise, preferably in a fenced yard. Prone to barking and howling, Beagles do not make good apartment dogs.

The Beagle is in the Hound group.

From Snoopy to Underdog, the Beagle has been portrayed in a variety of pop culture media including comic strips, animated cartoons, and movies. This breed frequently ranks in the top five most popular dogs in the United States and in the top 30 in the United Kingdom. Celebrities from Barry Manilow to United States President Lyndon Johnson have owned Beagles. What makes the Beagle so popular? They are medium-sized, even-tempered, and usually free of genetic diseases. Their keen sense of smell makes them valuable for hunting as well as for sniffing out prohibited substances in agricultural imports.

Origin of the Breed

Dogs similar to the Beagle have been in existence for at least 2,000 years, but the modern breed was developed in England in the 1830’s. Their ancestry includes the Talbot Hound, the North Country Beagle, the Southern Hound, and the Harrier. Beagles came to the United States in the mid-1800’s and were accepted as a breed by the American Kennel Club in 1884.

The American Kennel Club standard for Beagles includes two classes: 13-inch and 15-inch, referring to the height of the dog at the withers (the highest point on the back when the dog is standing on all four feet). They weigh between 18 and 35 pounds, with shorter dogs and females falling towards the lower end of the range while taller dogs and males come closer to the higher end. They have a smooth, domed skull with a square-cut muzzle and black nose. The pleading hound eyes are generally hazel or brown. The large, rounded ears are long, low-set, and soft. The broad chest narrows to a tapered waist, and the tail is white-tipped, allowing the dog to be seen during a hunt, even if the dog’s head is down to follow a scent.

Colors of the Beagle

Beagles are most commonly tri-color, that is, predominantly white with areas of black and brown. Tri-color dogs typically start out black and white, with the brown colors developing over the first two years of life. Less often, Beagles have just two colors, a white base with large areas of any other hound color including lemon (also known as light tan), red, reddish-orange brown, and liver (dark brown). Within the white areas, a Beagle may have ticks or small spots of a different color.

Beagles are tri-color and have keen sense of smell.

The Beagle is nearly as well known as the bloodhound for its well-developed sense of smell. While humans have about 5 million scent receptors, dogs have as many as 220 million. Beagles have the intelligence to differentiate between scents and to remember the odors for future identification of the same prey. In one research study, scientists put a mouse in a one acre field and timed different breeds of dogs to see how quickly they found it. Beagles found the mouse in an average of one minute, while Fox Terriers took as long as 15 minutes. Beagles are awesome at following a scent trail on the ground, but not quite as skilled at following an airborne scent trail. The long ears and large lips of the Beagle allow the dog to trap scents close to the nose and follow the trail along the ground.

One of the more interesting uses for Beagles is in detecting quarantined food items, which some travelers may attempt to bring back into the United States from vacations in exotic lands. These food items may be banned due to diseases they carry which could be transferred to native livestock, poultry, or crops. The small, non-intimidating Beagle sniffs the luggage of returning travelers and signal when improper imports are found. The so-called Beagle Brigade works for the United States Department of Agriculture. With more than 60 dog teams at over 20 international airports, they average about 75,000 seizures of illegal products per year. The Beagle is too small to climb over the luggage for explosives detection, but is perfectly sized to wander around and between bags to sniff out small food items.

In Australia, Beagles are trained to work for exterminators due to their ability to detect termites!

Aside from their value as scent dogs, Beagles are also popular companion animals. They are well-suited to households with children and other pets. They do become nervous when left alone and may howl or bark due to separation anxiety. They do not make good guard dogs as they are very friendly and enjoy company. Rarely aggressive, they may bark or howl at strangers, but will not typically attack. Because of their gentle, friendly nature, Beagles are also often used as therapy dogs, visiting the sick and emotionally disturbed. A newer program has found that children who read to dogs become better readers. Dogs are being brought into classrooms, where children who may be timid about reading aloud to their classmates are encouraged to read to the dog. Beagles are perfect for this use, as they are friendly, non-aggressive, and patient with children. 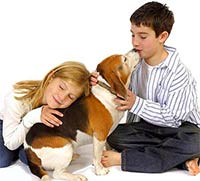 Beagles are great with kids.

Because a pack of dogs is typically used for hunting, Beagles were bred to be pack animals. They have a great need for companionship. If no other dogs are present in the home, they will turn to the owner to fulfill this need through abundant play time. Luckily, the Beagle is equally happy playing with the head of the household or the smallest child or anyone in between. Beagles love the whole family, not just the person who feeds them. Although they are not constantly underfoot begging for attention, they can become destructive if not sufficiently entertained. They have a lot of energy and love to go for long walks, where they can investigate all the good smells of the neighborhood.

Beagles are extremely intelligent dogs. Snoopy is the only one we have ever seen actually writing a book (“It was a dark and stormy night…”), but the breed is known as one of the smarter canines. One owner relates how her Beagle was able to open the locks on both her own crate and that of her mate. And, oh how these dogs love to roam! To a Beagle, nothing beats the open road, running the neighborhood or farmland, looking for new scents that may indicate something good to roll around in!

Training This Smart Breed can be a Challenge

Beagles are obedient, but may be difficult to train because of their single-mindedness and determination, qualities which have been in-bred because they are valuable attributes for hunting dogs. Training can often be accomplished by using food rewards. Because they are highly intelligent, Beagles become easily bored, so the exercises must be rotated to keep the dog interested. Training sessions should be kept short and must be repeated several times every day for up to two years in order to produce a very obedient Beagle. Consistency is key – training must be done regularly for a long, long time to generate the desired results. This is especially true of housebreaking, which may take up to a year for the stubborn Beagle.

Beagles are not known for having many genetic health problems and usually live about 12 years. As they age and become more sedentary, they are susceptible to weight gain which can lean to heart disease and joint damage. Their long, floppy ears can trap moist air, leading to ear infections. Other health problems may result from cuts, strains and sprains incurred while running after a rabbit or squirrel. In addition, fleas, ticks, and mites can be picked up during a hunt.

Beagles are often bred in puppy mills due to their popularity. Seek a reputable breeder!

A word to the wise: Beagles are often bred in puppy mills because of the extremely cute puppies they produce, which are very easy to sell. Dogs from puppy mills may have numerous genetic problems and may be overly aggressive. Before buying a puppy, you owe it to yourself and your dog to investigate the breeder thoroughly. A good, responsible breeder will be honest with you about whether a particular dog is right for your family and whether or not a particular breed has any special problems or requires any special care. Every puppy from a responsible breeder should come with a registration slip, a pedigree, and shot records. Look at all the dogs on the premises, not just the one you intend to buy. The dogs should be clean, healthy, and happy. Living conditions should be clean, well-tended, and humane. You may pay a bit more than you would at a puppy mill, but the problems you will avoid make the additional cost worthwhile.

Grooming a Beagle is relatively easy. Their medium-length hair sheds, particularly in the spring as they lose their thick winter coat. A second, less-intense shedding occurs in the fall. A Beagle should be brushed at least once a week, more frequently during periods of intense shedding. Brushing removes dead hair and promotes new hair growth, as well as distributing natural oils over the skin to condition it. The ears must be checked at least every week or two and cleaned out to help prevent infections.

A Fine Addition to the Family

Overall, Beagles are happy-go-lucky dogs that are very easy to own and care for. Regardless of whether you are looking for a hunting dog or a family pet, the Beagle will be a fabulous addition to your family!