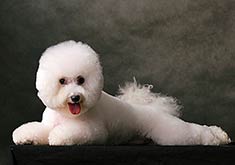 The Bichon Frisé is a small and sturdy dog breed who loves to be the center of attention. It is a merry, agile dog breed. A very friendly dog, the Bichon Frisé does extremely well with small children and other household pets. 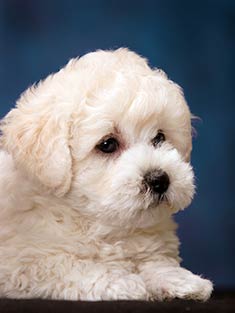 The Bichon Frisé originated in France.

Bichon Frisés range from 7 to 12 pounds.

Bichon Frisés are typically white, but can be shades of cream or apricot.

Bichon Frisés have a soft and dense1 undercoat and an outercoat that is coarse, puffy and curly. The Bichon Frise non-shedding coat must be kept dry and brushed out to prevent matting.

The Bichon Frisé is susceptible to eye, skin and ear problems, epilepsy and dislocated kneecaps.

The expected life span of the Bichon Frisé is 12-15 years.

Bichon Frisés do well in apartments if they are walked twice a day. The Bichon Frisé is a good dog breed for the elderly as long as they can exercise it.

The Bichon Frisé is in the Non-Sporting group. 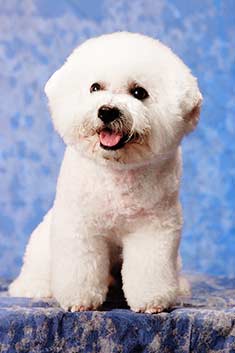 If you are looking for a dog you can spend lots of time with, the Bichon may be the breed for you! They are known as one of the most high-maintenance dogs in the world, so you can spend a ton of time grooming and loving these dogs. They are very similar to the Maltese, but Bichons are a bit larger, weighing 7 - 12 pounds, on average.

A Bichon Frisé has a very cheerful attitude and is feisty, affectionate, and playful. Although they are generally good with children, they may be a bit nippy. Care should be taken not to get the dog too wound up when a small child is in the room. You will be able to tell if your Bichon is getting wound up because he will run in circles from the sudden burst of energy, until he collapses on the floor, usually on his back, exhausted.

One guardian describes her Bichon as "a white ball of fluff", and states he is a "never-ending source of laughter and entertainment" for her and her husband. On his walks, the dog often greets the neighborhood children, enduring their petting "with unending patience and dignity" and as for barking neighbor dogs stuck behind a fence, he "just wags his feathery tail and sails past, nose in the air." Perhaps this woman's best endorsement of the breed is that since adding the Bichon to her home, she comes home "to a welcome that just jiggles with happiness. It is good to come home these days, because we know who is waiting to greet us with his big smile, yipping with delight at the sight of us, and a tail that blurs in its speed back and forth." Is there any better reason to have a dog in your home?

The Maltese originated in the islands of the Mediterranean. The name Bichon Frisé, translated literally from the French, means "curly lap dog". The breed goes back as far as 600 - 300 B.C., when it probably descended from the Water Spaniel and Poodle, then was bred down to its smallish size. The original Bichons were known as the Bichon Maltais, the Bichon Bolognais, the Bichon Havanais, and the Bichon Tenerife, which subsequently evolved into the breed's current cousins, the Maltese, the Bolognese, the Havanese, and Coton de Tulear (the Royal Dog of Madagascar).

The Bichon's compact size and happy disposition made him a favorite on boats. He was used on Spanish sailing boats to act as ambassadors for the Spaniards as they explored new lands. The explorers wanted to make the natives like them as they were claiming the land for Spain. 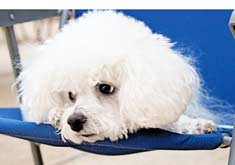 Bichons are notoriously smart and easy to train, making them a favorite for circus acts. And with a life span approaching 17 years, you will not have to re-train a new puppy as often as you would with some other breeds. They are most easily trained with play and treats as rewards. The use of choker chains is discouraged because the links get tangled in their fur. If you are going to use treats for training, you will need to watch out for obesity, as it can cause many problems for the dog as it gets older.

Unfortunately, this ease of training does not extend to housebreaking. If you are considering adopting a Bichon, you need to be prepared for the fact that you will have messes in your house for a while. One of the most common reasons why Bichons end up in shelters is because people adopt them without knowing what to expect.

The biggest thing you must consider when adopting a Bichon is whether or not you have the time and patience to keep the dog properly groomed. Starting at a very young age, you will need to get your Bichon Frisé accustomed to being brushed. Even if you have him groomed monthly, you will still need to brush the dog at least twice a week. Aside from preventing mats and tangles, brushing is needed to prevent hot spots from forming. 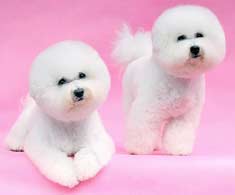 Undercoat Can Cause Skin Irritation

Many dogs with an undercoat are prone to hot spots, and the Bichon is no exception. The undercoat doesn't drop off of the dog when it sheds; it simply gets caught in the topcoat and must be brushed out. When it is left behind, it can irritate the dog's skin, causing him to scratch or chew excessively, creating an infection known as acute moist dermatitis, or a hot spot. Fleas, insect bites, ear infections, anal gland problems, allergies, and infection can also cause the formation of hot spots, as can stress and boredom. Keeping your dog clean and dry can help to prevent hot spots, as can sprinkling any minor spots with a drying powder such as Gold Bond ® before they become major problems requiring a trip to the vet.

The drop ears on a Bichon make him susceptible to ear infections. To minimize the chances, you must keep the ear canals clean and free of hair to allow proper air circulation in the ears. Simply sprinkle some baking soda on your fingers and pull out any hair growing in the ear canal. You don't need to worry about the hairs on the floppy part of the ear, only those in the ear canal. Pulling these hairs will not cause your dog any pain, and it may help him to avoid painful infections.

You will also want to make sure the dog's ears remain clean and dry. Every 2 - 3 weeks, you should clean the ear canals with cotton balls soaked in hydrogen peroxide or dog ear wash. Wrap the cotton ball around your finger and clean the inside of the ear canal. You don't need to worry about hurting the dog's eardrum, as you will not be able to reach it. 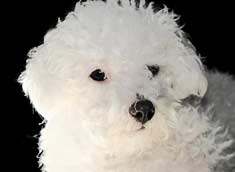 The last regular grooming task you will need to perform with your Bichon is to remove tear stains around his eyes. The cause of these stains is not truly known, but has been tied to stress, overactive tear glands, infections, allergies, or eyelashes that turn inward, irritating the eyes. The hair around the eyes should be cleaned with warm water or diluted lemon juice after meals. Giving the dog only distilled or bottled water may help to prevent the stains from forming, as the iron in tap water causes the dog's secretions to turn reddish. A better quality dog food, or one that does not contain food coloring, may also help.

If you decide you can handle the grooming, the Bichon will be a great addition to your home. Even the breed standard speaks of his "gentle, mannered, sensitive, playful, and affectionate" temperament. As the American Kennel Club notes, "A cheerful attitude is the hallmark of the breed and one should settle for nothing less."