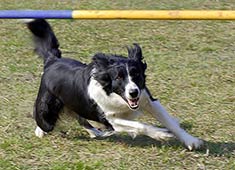 The Border Collie is a medium sized dog with a tapered muzzle and half-perked ears. 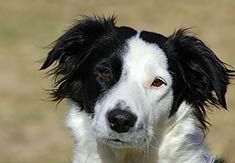 The Border Collie's coat colors can be black and white, tri-color, red & white, black & gray, or all black.

There are two types of coats, one with sleek hair and one with coarse hair.

The Border Collie is a high energy breed that loves to work and requires activities to keep it healthy and occupied. Border Collies are highly intelligent, sensitive and responsive. They thrive on pleasing their owners day in and day out and will not be happy sitting around a house all day. Border Collies are very energetic, highly trainable and have great stamina.

The Border Collie has been known to suffer from progressive retinal atrophy, ceriod lipofuscinosis, joint problems.

The Border Collie can be expected to live about 12-15 years.

Not suited for a confined living space, the Border Collie will thrive on farms and ranches, where it can make the most of its excellent herding abilities.

The Border Collie is in the Herding Group

When you first think of a Border Collie, chances are you have a mental picture of a dog herding some kind of livestock, but with the proper training and socialization, this breed can make an excellent family pet. They are loyal and highly intelligent, making them excellent watch dogs--remember "Jack" in the Little House on the Prairie series? They are also excellent at dog sports such as agility, obedience, and competitive herding.

The Border Collie is a medium-sized dog with a medium-length double coat. Most commonly, these dogs are black with a white blaze down the head and on the chest, the paws, and the tip of the tail, but they may come in tricolor, red and white, blue merle, brindle, gold, lilac, and blue. The eyes may be anywhere from deep brown to amber to blue, and sometimes a dog may have one blue eye and one in some shade of brown. The ears run the gamut from fully erect to fully droped. Because of the vast variability in appearance, Border Collies are evaluated more for attitude and ability than for whether or not their looks conform to a set breed standard. 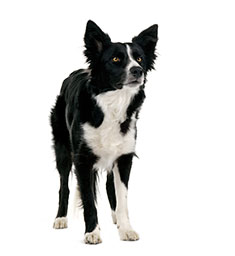 Border Collies stand anywhere from 18 to 22 inches tall at the whithers and weigh from 25 - 65 pounds. Their coat may be rough, smooth, or somewhere in between. Rough-coated dogs are most likely to cause problems in your home by dumping their undercoats every spring, but all Border Collies do shed somewhat year-round.

Where did Border Collies originate?

This quintessential herding breed came to us from the England, Wales, and Scotland, toward the end of the 19th century, where herding sheep along the rocky coastlines is somewhat of an art form. The dogs were originally called simply "collies" but in 1915, the Secretary of the International Sheep Dog Society in the UK, James Reid, renamed them "Border Collies" to distinguish them from the Lassie-type of collie. 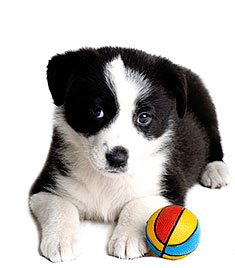 In Canada the Canadian Border Collie Association is the registry of choice, with membership being based on performance in herding rather than appearance.

Breed standard for the Border Collie

For those organizations that register by appearance, the dog is judged in conformation trials on the basis of, among other things, an intelligent, alert, eager expression. Brown eyes are preferred, and ears should be erect or semi-erect. There is no preferred coat color - all are acceptable.

Dogs registered as breeding stock with organizations who base registry eligibility based on herding ability are generally tested using the International Sheep Dog Society's Sheepdog Trial. To qualify for registration, a dog must gather sheep without disturbing them too much and direct them through obstacles at varying distances from the handler. The dog must then pen the sheep and sort them according to instructions from the judge or the dog's handler.

What else are Border Collies good at?

Obviously, qualifying for registry in a Sheepdog Trial is very demanding work, requiring intelligence, agility, independence, and outstanding obedience. Because of this, Border Collies make great competitors in a number of dog sports including agility, flyball, and obedience trials. They also will play soccer, frisbee, softball, tetherball, touch football and basketball. Anything that involves chasing something that is moving and being physically active is right up their alley. 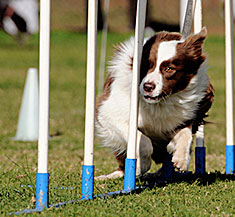 They love being physically active

Border Collies have also been known to be excellent at chasing children back to their beds in the middle of the night, which brings us to the next question:

Are Border Collies good with children?

Although you can train a Border Collie to be good with your children, you may have a tough time overcoming his herding instincts. This dog is attracted to anything that moves, and doesn't understand why it is wrong to nip at the heels of whatever it is he has decided needs to be herded.

Sneaking up behind a Border Collie, as children are wont to do, can result in a nasty cut, as the Border Collie whips his head around, ready to do battle with whatever is threatening him and his flock.

Although the dog's high energy level may seem to be a good fit for your children, this is definitely not a natural match. Careful training and early, consistent socialization are required if this dog is to be a family pet. The dog must learn early that he is not the boss of the family. When the dog begins herding children, you must tell him no and then totally ignore him for awhile, giving all of your attention to the kids. After a few minutes, invite the dog back into the game, but be prepared to stop the game again when he becomes aggressive.

Is the Border Collie the dog for me?

If you own sheep, the answer is a definitive yes. These loving dogs will go to great lengths to please their humans. However, if you don't own sheep, you may want to think long and hard before taking on this breed. Many Border Collies end up in rescues and shleters simply because the people who adopted them didn't know what to expect or found their herding instincts too hard to deal with. Far too many children are bitten by Border Collies, not because the dog is aggressive, but because the child moved quickly and the dog thought he was supposed to keep him from running away from the flock.

Think about this from the dog's perspective. For the past 200 years, he has been selectively bred to be a herder. His first reaction to a runaway is to get in front of the animal (or your child) and glare at him, barking ferociously. Chances are your child will find that scary and will begin screaming or running away. Since the child didn't do the "right" thing by returning to the fold, the dog must do something else to keep the child "safe". His instincts tell him to nip at the heels and tuckus of the child, which will normally cause the child to run faster and scream louder. Now the dog is really worked up. This runaway is not cooperating the way he should! So, now the dog grips the child's leg the same way he would a calf or lamb, with the problem being that farm animals have much tougher hides than your 3-year old does. Both the child and the dog are acting according to their instincts, but the dog is generally sent away or euthanized because obviously we value our children more than our dogs.

Even without children in the household, Border Collies are difficult to handle. Although the Border Collie is arguably the smartest of all breeds, his incessant need for work makes him hard to keep occupied. He will make his own work if you don't provide him with something to do. This breed is accustomed to running for miles on rocky terrain; a simple 20-minute walk every evening after dinner is not going to use up his energy. If you have the time, energy, and commitment to properly train your dog and provide an outlet for his boundless energy, this may well be a breed you should explore.