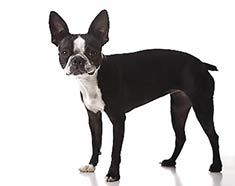 The Boston Terrier is a compact, well-muscled and clean-cut dog breed who rarely sheds. Determined, strong and sturdy, yet affectionate and loving, the Boston Terrier is one of the most popular dogs. Intelligent and lively, this dog breed makes an excellent companion. Boston Terriers are true companions. While displaying a spunky sense of humor and upbeat nature, they tend to be very well-mannered, affectionate and loving. Truly gentle at heart, they are quite content and easy going indoors, their loyalty is obvious as they love cuddling and spending time with their adopted family. A daily walk is necessary to keep them in shape . As long as they have a chance to exercise, they will do well in a small apartment or living space. They don't mind sharing their space with children, other animals or people as long as they are properly socialized. The Boston Terrier is a fast learner, and very sensitive to inflection in voice and the mood of their surrounding environment. Training methods should be gentle, positive and encouraging, never involving harsh dog training methods. 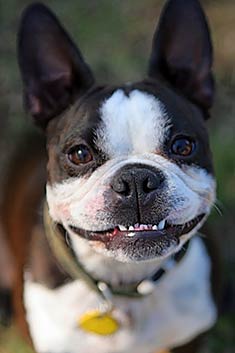 The Boston Terrier originated in the U.S.

Boston Terriers can have coats that are either brindle or black with white markings.

The Boston Terrier is susceptible to eye problems, breathing and whelping difficulties.

The expected life span of the Boston Terrier is 10-14 years.

Boston Terriers do well in apartments as long as they are walked twice a day.

The Boston Terrier is in the Non-Sporting group.

The Boston Terrier: A True Gentleman 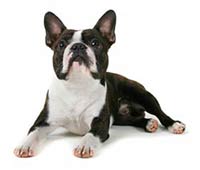 The Boston Terrier looks like a true gentleman all dressed up in a tuxedo with his black and white markings placed in all the right places. He is truly a spiffy little character with his short, sleek, and shiny coat.

Even though he is small in size, he is extremely big in personality. A well socialized Boston Terrier loves to mingle with the crowd, making his presence known to everyone. He loves to play games and entertain while still keeping his reputation as a cool, classy individual.

The Boston Terrier got his name from Boston, Massachusetts where he first originated. He is considered to be a true American breed.

As a companion dog, he was very easy to train and take care of which made his reputation even greater. He then entered the dog show arena in 1878 in Boston. After that, he was accepted by the American Kennel Club in 1893. He is now one of the top 20 AKC registered breeds.

Over the years his personality and reputation has only improved, while his size has decreased. He now has three weight classes. This alone justifies him as not being a toy dog. He is considered to be a small to medium breed. The weight classes group Bostons as 15 pounds and under, 15 pounds to under 20, and 20 pounds not exceeding 25.

His colors range from brindle, seal, which is where the black looks red in the sunlight, and black. All of these should be marked evenly with white. Solid colors without the white are unacceptable. Breeders who charge more for a so called rare solid white Boston Terrier are selling a dog that is unacceptable by the breed’s standards and should not be selling it at all. Any Boston Terrier with a flesh colored nose is also unacceptable. The nose should be pure black just as the eyes should also be pure black or very close to it. A docked or shortened tail is unacceptable.

Boston Terriers do not require lots of work to keep them tidy and clean. They should be brushed once a week and only bathed when needed. There coat is short and easy to dry, brush, and groom after a bath. Their nails should be trimmed regularly. If the owner cannot do this themselves, then a vet will gladly do it for them. Always check the eyes and ears for any debris. If they need cleaning, wipe with a damp washcloth very gently. If any odor or drainage is detected then seek a vet’s advice. Trimming of the whiskers is strictly an option of choice and is not required by breed standards. The teeth should be brushed regularly to avoid any dental problems in the future. Dental items can be purchased at any pet supply store.

Boston Terriers do have some genetic faults. Among these are skin problems due to allergies, Patellar luxation , dislocation of the kneecap, which is a skeletal disorder, cataracts, and difficulty breathing in hot weather due to their flat face and pushed back nose. Never leave them outside or inside a hot car or dwelling without air-conditioning, they can die.

The Boston Terrier should look square in appearance with small erect ears. His neck should be slightly arched with an overall level top line. He should have very muscular, strong looking thighs. His feet should be small and compact and should neither be pointed in nor out. He should have a stocky appearance and be wide-eyed.

If you purchase a Boston Terrier puppy, then you will have to go through the whole process of housetraining and giving immunizations. Housetraining is easy if you keep one word in mind, “consistency.” Always take your puppy to the same place to eliminate and do it at the same times everyday. Give rewards when you are pleased with them and punish when you are not. That doesn’t mean to yell, scream, or hit your puppy when they mess up. It simply means to tell them, “no,” “bad boy” or “bad girl” then take them to the spot they are to eliminate, if they do then pet and praise them lavishly giving them a reward like a snack. You should feed your puppy three meals a day until he turns 12 weeks old, then twice a day for the rest of his life. Feeding him on a regular schedule will make him eliminate on a regular schedule making it easier for you to predict when he will need to relieve himself. A good thing to keep in mind when housetraining is that if you don’t want to wake up in the middle of the night to take him out, then you need to stop his water intake at 7:00 P.M.

Now, as for your puppy’s shots, they should have already been started before you purchased your puppy. If not, then you bought from an irresponsible breeder. You need to start giving the puppy his or her shots immediately beginning at 6 weeks old. If your puppy is older than that, then start right away no matter what age your puppy is. Just like a child, they have to have a series of shots. You can do this yourself by ordering your puppy’s shots through the mail and giving them yourself or you can take your puppy to the vet where they will give them for you, but this can cost a lot more. Rabies shots have to be given by a vet and it is a law that your puppy has to have this in all 50 of the states in the United States. The age this is done varies by which state you live in, so ask your chosen vet about it.

Before you can bring home your new Boston Terrier puppy, you have to have the essentials. You will need a medium sized crate, food, a food and water bowl, a leash, a collar, some chew toys, and don’t forget the most important thing of all, an ID tag with all your new puppy’s information on it.

Your first few nights at home will be the hardest on you and your puppy. He will be learning your routine. He will whine and cry for you because he is not used to being alone. Don’t baby him; if you do he will learn that if he cries you will come to his rescue which will make him do it even more. After about three days he will stop crying.

Always put him in his crate at night when you are sleeping or when you cannot watch his every move. Take him out every hour or two to the spot he is to eliminate. As I said before, always praise him when he pleases you. Take him back inside and offer him food and water. If he eats, take him back out. He may have to eliminate again. If he does, reward him. If he doesn’t, take him in and watch him like a hawk. If he starts to eliminate in your floor, firmly say “no” and take him back to his eliminating area. If he does eliminate in your floor and you don’t see him do it, pick him up then show him what he did telling him “no, bad boy” then taking him to his elimination area. The best way to determine how long they should be in their crate without having to go eliminate is to go by their age. Two months can wait two hours, three months can wait three hours, four months can wait four hours, and five months can wait five hours, but six month old dogs and up should never have to hold it over six hours. That’s just cruel.

Never leave your puppy unsupervised anywhere. They’re like babies and can get into harmful situations very quickly. Always keep them confined to where you can watch them by using baby gates.

There are many things that people have around their houses that can be fatal to dogs. Here are just a few of them, cleaning products, poisons, electrical cords, dental floss, yarn, needle and thread, toilet bowl cleaners, trash cans, diaper pails, medicine bottles, antifreeze, fertilizers, mulch, chocolate, nuts, grapes, and raisins. There are many plants and flowers that are toxic to dogs if eaten, they are Daisies, Azaleas, Belladonnas, Bird of Paradises, Bulbs, Calla Lilies, Cardinal flowers, Castor beans, Chinaberry trees, Daphne, Dumb canes, Dutchman’s breeches, Elephant’s ears, Hydrangeas, Jack-in-the-pulpits, Jasmine, Jimsonweeds, Larkspur, Laurels, Lily of the valley, Mescal beans, Mushrooms, Nightshades, Philodendrons, Poinsettias, Prunus species, Tobaccos, Yellow jasmine, Yews, and Taxus species. These are just some of the things that can kill your dog if eaten. If you would like to know about more, then visit your local library or investigate any other information sources.

After your Boston Terrier has completed all his immunizations he will be ready to socialize with the outside world. Socializing him with other pets and people will make him a better companion to you. But, keep in mind that just like children, dogs can learn bad habits from others. Keep him away from bad influences. This is a good time to start teaching him the commands you want him to follow. Always remember that a good, well behaved dog is produced through good teaching, he’s not bought that way and good genetics won’t automatically make him one.