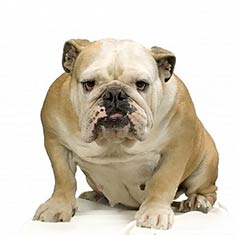 The Bulldog is the national symbol of Britain. This dog breed has a dense and powerful, low-slung body with wide shoulders and a massive short-faced head. Despite its early breeding to bait bulls, the Bulldog is gentle and good natured and makes an excellent companion for the whole family. 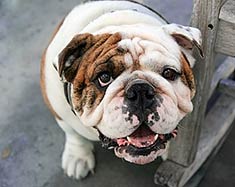 The Bulldog originated in Great Britain.

Bulldogs range from 12 inches to 14 inches.

Bulldogs have short and smooth coats that require minimal brushing.

The Bulldog is a friendly and good natured dog breed. Gentle and mellow, the Bulldog is very good with children and strangers. Some Bulldogs may be aggressive with strange dogs, but generally get along well with other pets.

The Bulldog is susceptible to breathing and whelping difficulties, patellar luxation and overheating

The expected life span of the Bulldog is 8-10 years.

Bulldogs are a less active breed and need little exercise to remain happy. A good apartment dog, a walk a day will provide ample exercise for this affectionate breed. This dog breed should not be expected to run or walk long distances, especially in hot weather.

The Bulldog is in the Non-Sporting group.

Are you looking for a friendly canine companion that enjoys that company of people, but won't wear you out demanding constant exercise and activity? If so, a Bulldog might be a great choice for you. Your Bulldog won't mind going on an occasional stroll with you, but this is definitely not a canine with a lot of excess energy to burn. 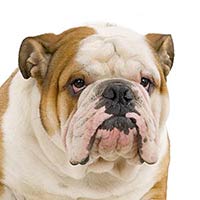 The Bulldog isn't the prettiest dog, but he is loving and loyal.

As a matter of facts, Bulldogs often make perfect pets for condominium and apartment dwellers. They don't mind being outdoors on occasion, but Bulldogs are definitely more suited for a couch potato lifestyle than that of a yard dog. In warm climates, it's actually necessary to limit the amount of time these canines are allowed to spend out of doors. They get overheated very easily, and extended exposure to high temperatures can be very dangerous for these dogs.

Bulldogs do not have a reputation for being beautiful pets. When it comes to appearance, Bulldogs are sometimes described as having faces that only a mother can love. Some people find them adorable and others find them highly unattractive. Many people simply say that these dogs are "so ugly that they are cute". 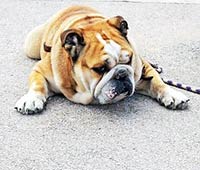 Adult Bulldogs generally stand just over a foot tall, and weigh in between 40 and 50 pounds. Even though they aren't huge, they have very muscular, beefy builds, and are quite strong and powerful. Bulldogs are characterized by big, dark eyes, short legs, broad bodies, and enormous jowls.

Like many sturdy dog breeds, Bulldogs really enjoy eating. While they have gentle loving natures virtually all of the time, Bulldogs aren't happy when other canines in the household come near their food. If you have more than one dog, and one of them is a Bulldog, it's advisable to use separate bowls for their food and water. Additionally, itís important to monitor your Bulldog's eating habits carefully to make sure he or she doesn't become obese.

Bulldogs aren't known for being elegant or particularly well mannered. Their huge jaws are floppy, and they tend to drool profusely and frequently. They also have a tendency to snore and experience flatulence on a regular basis. 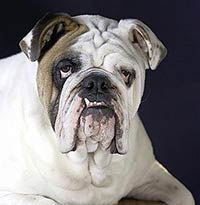 A face only a mother could love? Perhaps!

What they lack in couth, Bulldogs more than make up for when it comes to providing loyal and loving canine companionship. If you want a strikingly beautiful, elegant dog, an Afghan Hound will definitely be a better choice for you than a Bulldog. However, if your primary concern is to find a canine companion that will provide you with love, companionship, and affection, then a Bulldog might be the perfect addition to your household.