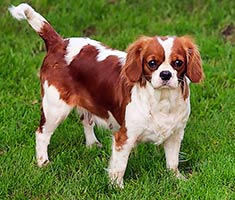 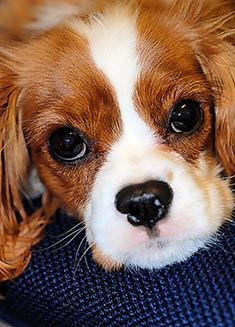 Cavalier King Charles Spaniels may be black and tan or white, black and red or rich red or white and red.

The expected life span of the Cavalier King Charles Spaniel is 9-14 years.

Cavalier King Charles Spaniels is an indoor dog, who makes a good pet for apartment living.

The Cavalier King Charles Spaniel is in the Toy group.

A breed so special that King Charles II of England passed a law that they be allowed into any public place, including the houses of Parliament! The breed was even named after this king, who reigned in the mid-17th century. The original breed was known simply as the King Charles Spaniel. Over time, the dogs were bred to resemble the popular Asian breeds such as pugs and Japanese Chins, with their short snouts and dome-shaped heads.

In the 1920’s, American Roswell Eldrige offered a prize for anyone who could breed an old-fashioned King Charles, with a longer nose, flat skull, and a spot in the middle of the crown of the head. These three features are the basis for the separate breed known as the Cavalier King Charles Spaniel.

The king’s home in the 17th century was known as Blenheim Palace, and the king had a preference for dogs with chestnut red and white coloring, so that particular combination became known as Blenheim. The spot on the crown of the head is also sometimes called the Blenheim Spot, although others call it the Kissing Spot or the kiss of Buddha. The dogs also come in three other colors: ruby ~ a rich solid red, black and tan ~ solid black with tan points, and tricolor ~ black and white with tan points. 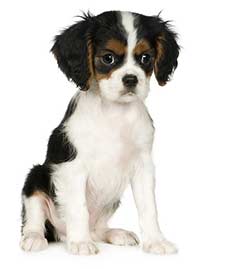 If you remember your world history lessons, you will remember that the English Royal Family is very into hunting. These dogs are wonderful hunters, but will take off after anything that moves. If you plan on adding a Cavalier King Charles Spaniel to your family, you simply must have a fenced yard. The dog will not pay attention to passing cars and is often tragically killed during the chase of a rabbit or squirrel. Off-leash play in an unsecured area is also not recommended for the same reason.

The Cavalier has fur very much like a Golden Retrievers – moderately long and silky, with a bit of a wave to it. The fur never needs trimming, but does require frequent brushing. In fact, trimming of the long feathered fur along the ears, chest, legs, feet, and tail brings a fault in the show ring. Daily brushing will keep the fur from tangling and will remove objects which become entangled in the fur.

Their eyes form deep pools of brown, and have dark rims and cushioning under the eyes. This gives them a very soft expression. This is fortunate, as it makes them look as lovable as their personality! The King Charles has been called the ultimate lap dog, although it is one of the largest of the toy group. The breed is very affectionate and never shy. They are generally good with children and other pets, although it would never occur to them that they might not be welcomed with open paws by a more aggressive dog. Care must be taken when introducing a Cavalier to an already-established pet in your home.

The social nature of the King Charles means it is especially susceptible to separation anxiety. This is not a dog who will sit patiently at home while you go to work all day. He enjoys and requires nearly constant companionship to maintain his friendly nature.

As with many toy breeds, Cavalier King Charles Spaniels can exhibit possessive aggression, meaning they do not easily give up their toys or food. They may growl or even bite if they are challenged for their “possessions.” The dog may bring you his toy, dropping it at your feet, then attack you if you try to pick it up. Think of them according to the toddler’s rules of ownership: What’s mine is mine and what’s yours is mine. Anything I see is mine. Anything I want is mine. Anything you have that is similar to the one I have is mine. Treatment for this problem involves a strict plan of behavior modification where you progressively teach your dog to allow you to pick up objects that are placed near him without growling at you. 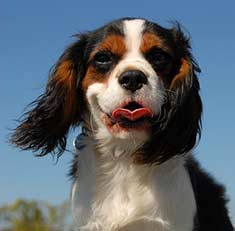 Nearly all Cavaliers eventually develop mitral valve disease, which causes a heart murmur and eventually heart failure. In this disease, the heart’s mitral valve begins leaking, causing the heart to become inefficient at pumping blood. Eventually, the blood begins to back up into the lungs, causing heart failure. This is the leading cause of death in the breed, usually taking dogs before they reach ten years of age. The King Charles spaniel is likely to develop the beginnings of the disease as early as 1 – 2 years old, and the murmur will likely be quite evident by age 5. Veterinarians have recommended that breeders try to selectively breed out this genetic tendency for early-onset heart disease, but it appears that breeders are not taking heed. You can help by buying your dog from a responsible breeder who has cardiac clearances on his breeding stock. The parent dogs should be cleared by a vet cardiologist after turning 2-1/2 years old, while the grandparent dogs should be heart-clear until age 5.

Another very common disease in Cavaliers is syringomyelia, a condition where the back of the skull is malformed, causing the brain to be pushed out into the spinal canal. This creates a blockage, and thus pressure, of cerebrospinal fluid, which can cause anything from mild discomfort to partial paralysis. Nearly 90% of Cavaliers have the skull malformation, and somewhere between 30 and 70% experience herniation of the brain. Symptoms include sensitivity around the head and neck, causing the dog to whimper when he scratches his neck. He may even begin to “air scratch”, not actually letting his foot touch his neck. Symptoms generally appear between six months and four years of age. As the disease progresses, you may notice your dog falling down a lot, as he loses his sense of proprioception (knowing where your body parts are positioned). There is no treatment, although again, responsible breeding could eliminate the problem. An MRI will show whether or not the breeding stock is Grade A, meaning that they are clear of syringomyelia, regardless of whether or not they have the skull malformation.

If you have your heart set on a Cavalier, be prepared to do some careful shopping and waiting. Interview several breeders until you find one who is able to intelligently discuss the health of his sires and dams. Once you are assured that this breeder is responsible, ask to be put on his waiting list for the next litter. It is not unheard of for good breeders to have waiting lists of a year or more because they do not pair just any dogs. They look for breeding pairs that will produce healthy, sociable dogs that meet the breed standard. It takes time to produce litters this way, and pups will not be available year-round. A word of advice: good, responsible breeders do not generally advertise, as they get more than enough customers by word-of-mouth. Go to a dog show and ask the handlers and trainers to refer you to a reputable breeder who is concerned enough about the breed to health-check dogs before breeding them.

Once you have found a breeder that can supply you with a healthy dog, take the time to wait rather than going to a puppy mill or backyard breeder. You want your new family member to be a happy, healthy companion who will be an asset to you, even if you do not intend to breed him. This is one breed that you really want to have registration papers for, even if you are not interested in show trials. Holding out for the right dog means you will be able to enjoy your Cavalier Spaniel’s fun, outgoing personality for many years to come!