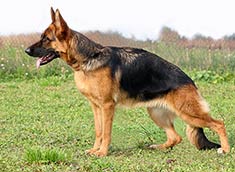 The German Shepherd Dog is a strong, agile dog, and possesses one of the keenest noses in the dog world. Unsurpassed as a working dog, German Shepherds are the original "drug dogs," and can easily adapt to both protection and police work. Smart and protective, the German Shepherd Dog truly bonds with its family and can suffer separation anxiety when boarded. 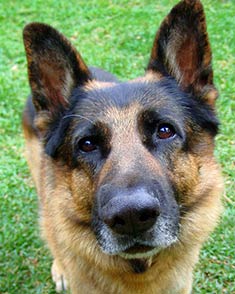 German Shepherd Dogs are most commonly black, gray and tan.

German Shepherd Dogs have an undercoat, which protects against temperature and bugs, as well as a straight outer coat. Their coat requires regular brushing.

The expected life span of the German Shepherd Dog is 10-12 years.

German Shepherd Dogs need frequent exercise and daily mental challenges. They make good housedogs, although a fenced yard and plenty of stimulation is crucial for this devoted and faithful dog breed.

The German Shepherd Dog is in the Herding group.

Bold. Cheerful. Obedient. Hard-working. Eager to learn. Fearless. These are just a few of the adjectives that apply to the German Shepherd, the third most popular breed in the United States. This beautiful dog has a desire to please and protect his human companions. Remember Rin-Tin-Tin? He was one of the top stars in Hollywood during the 1920s and 1930s, receiving over 10,000 fan letters each week while making more than 25 shows for Warner Brothers. A soldier found Rin-Tin-Tin when the dog was just a lost puppy. His intense desire to please the soldier who adopted him made him easily trainable for the athletic stunts he performed on television and the big screen. 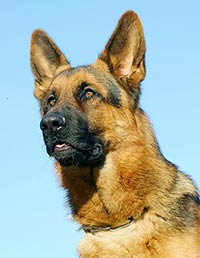 Loyal, intelligent and fearless. What more could you want in a dog?

Stories are told the world over of the breed's great loyalty and intelligence. A farmer in Vienna, Ontario was trapped when his tractor overturned nearly two miles from home. The farmer ripped off a piece of his shirt, wrote a message to his wife on it, and tied it to his dog's collar. The dog ran home to the farmer's wife, who sent help, saving his life. In police departments throughout the world, German Shepherds are trained at a cost of between $5,000 and $10,000 to sniff out narcotics and explosives, as well as to protect their handlers, track criminals, search buildings, and control crowds.

A Dog With a Job

In fact, German Shepherds are known as a breed that needs to have a job to do. They were originally bred in Germany as sheepherding dogs, leading to their name. Both German and Allied forces used German Shepherds during both World Wars. Their bravery, intelligence, and dedication led to their use as messengers, rescuers, sentries, and personal guard dogs. Many servicemen brought the dogs back home to the United Kingdom and the United States, leading to the dog's rise in popularity the world over. 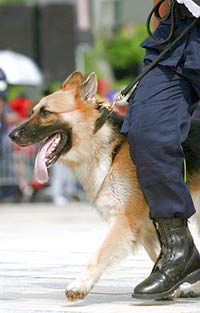 German Shepherds are often used for police work, a job they're well-suited for

German Shepherds are also used extensively as assistance dogs, guiding the blind, alerting the hearing-impaired to noises and alarms, pulling wheelchairs, opening cupboard doors, and picking up dropped items. The first guide dog in the United States as a German Shepherd named Buddy who was paired with a blind teenager named Frank. The pair then campaigned tirelessly for better medical care for service dogs for the rest of their lives.

Alex, an 8-year old in Kentucky, has severe epilepsy. His assistance dog, Lady, presses an alarm device to alert Alex' parents when he is having a seizure. At one time, Lady even woke up Alex' mother when she sensed that a seizure was about to occur. It turns out that the body releases chemicals a dog can smell. These chemicals change just before a seizure, alerting the dog that an episode is imminent. In addition to providing individual support for Alex, Lady has even traveled to Washington, D.C. to encourage lawmakers to provide funding for assistance dogs through the Medicaid program. Lady came from an Ohio-based non-profit organization called 4 Paws for Ability at a cost of nearly $10,000, raised by Alex' family and friends.

Although normally aloof with strangers, German Shepherds make surprisingly good therapy dogs, visiting nursing homes, hospitals, and childcare centers. They provide cuddling to the lonely, warmth and affection to the depressed. The dog seems to be able to sense what is needed and put aside his suspicion of unknown people to provide companionship and love to those who need it most.

German Shepherds are used extensively as search and rescue dogs due to their keen sense of smell. In the days following the September 11, 2001 bombings of the World Trade Centers, German Shepherds searched the rubble for survivors. Because so few people were found alive, the handlers actually had to hide and allow each others' dogs to find them, just to keep the dogs from getting depressed over not being able to help.

A recent article in the Tampa Tribune relates the special story of Nubs and U.S. Marine Major Brian Dennis, who recently returned from Iraq. Major Dennis' Border Transition Team found Nubs near the Syrian border, his ears hacked off and left to die after being stabbed with a screwdriver. The Marines carried the dog to their base and nursed him back to health. Soon after, they left for the al-Anbar province. Imagine their surprise when Nubs showed up at their combat outpost after tracking them for 70 miles! After learning it was against military regulations to keep a pet in a war zone, Major Dennis began an e-mail campaign to raise the $3,500 it would cost to ship Nubs back to California. Marine buddies kept Nubs until Major Dennis shipped home from his second tour of duty in March for a happy reunion on the tarmac at Fort Pendleton.

Heartwarming stories like this are bound to keep the German Shepherd one of the most popular dogs for many years to come. However, there are some important things you should know. If you are thinking of adding a German Shepherd to your family, it is important that you give consideration to your lifestyle and how the dog will fit into it. The dog has an overwhelming need to work. If you are sedentary or plan on leaving your dog home alone much of the time, the German Shepherd is probably not the breed for you. He needs daily strenuous exercise and a sense of purpose. If you don't provide it, you will likely spend most of the dog's life cleaning up the messes he makes with your belongings. Remember the movie Turner and Hooch? Whenever Tom Hanks left the dog alone, his house was trashed. Hooch wasn't a German Shepherd, but you get the idea.

German Shepherds need regular exercise and a sense of purpose

Another consideration with the German Shepherd is shedding. These dogs have a medium length double coat, and they shed year-round. Shedding is more intense during the spring and fall. Daily brushing will prevent matting and minimize loose hair to keep it off of your furniture and carpets. German Shepherds should be bathed only once or twice a year. Frequent bathing removes the natural oils from their fur, causing it to dry out and break off. The undercoat is typically silvery grey, while the top coat may be black and tan, sable, or all black.

German Shepherds are often thought of as mean or aggressive. This misconception arises from their fierce loyalty. Properly trained and socialized, German Shepherds make wonderful family pets. It is important that you establish yourself from day one as the alpha dog in the relationship, making sure the dog does not usurp your dominant position. The dog's intelligence and eagerness to please makes him easy to train. Positive training methods must be used. Trying to train a German Shepherd by punishing him when he doesn't react to your commands results only in the dog becoming stubborn about disobeying you. Once you have established the proper pecking order, the dog will protect you to his death. And he is likely to come out the winner in nearly any battle. His strong scissors bite can produce up to 1200 pounds per square inch of pressure. This is not a dog you want to have angry at you. However, the dog is not naturally aggressive. With "nice" strangers, he may be aloof, but he will not lash out unless he senses danger to his home or family. 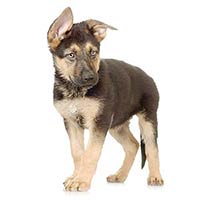 Once you are sure the German Shepherd is the right dog for you, take the time to find a good German Shepherd breeder from whom to buy your puppy. Because of the breed's popularity, many disreputable breeders have entered the field trying to make a quick buck. Responsible breeders should guarantee the dog against severe hip dysplasia and should carefully screen prospective owners for a good match with a particular dog. Ask the breeder questions about the puppy's parents and don't take a dog that doesn't come with written proof of health examinations. Although there are many fine German Shepherds in shelters and placed with rescue organizations, the intense loyalty of this dog to its first owner may make it tough to create a bond. In addition, poor training or maltreatment in his first home may make the dog more aggressive than you had originally anticipated.

Making sure you know what you are getting into before getting a German Shepherd will assure a long and happy relationship with one of the most-loved breeds around. Bold. Cheerful. Obedient. Hard-working. Eager to learn. Fearless. What could be better?