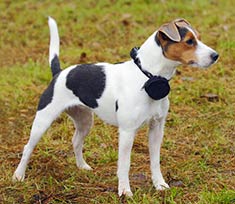 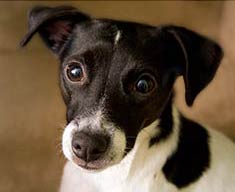 The Jack Russell is a form of small breed terrier. Most Jack Russell Terriers are predominately white with black, tan or multi-coloured markings. These markings are commonly found on their head, face and tail. They are bred to be very vocal dogs; they are very intelligent and full of energy.

The origins of the Jack Russell are in fox hunting, they were bred to seek out foxes that had chosen to hide underground while in pursuit. Their flexibility and courage allows them to enter small burrows and seek out prey without causing harm. The term Jack Russell is usually used to describe a working dog; the chest size is generally used to determine whether the dog is workable, a large chest that does not allow the dog to enter and work in the burrows makes them virtually useless as a working dog. The chest size of a working Jack Russell should be 12-14 inches, and their average weight should be about 14 lbs. 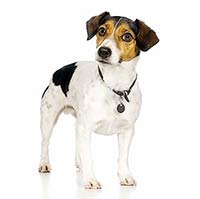 Courageous and active, Jack Russells are a big dog packed in a small package

Despite their compact size the Jack Russell is not a lap breed. With their high-energy and inquisitive nature they are most content in a busy household with lots of attention and room to run. They are often considered as a great pet for children because of their constant need to move and play. This breed requires consistent training, exercise and stimulation to maintain a good temperament. Jack Russells who are not consistently trained, exercised or stimulated may exhibit bad behavior by escaping from the yard, barking excessively or digging in unwanted places. Prospective owners are encouraged to do their research before making a commitment to this high-maintenance breed. Every year hundreds of Jack Russells are abandoned by owners who could not tend to their needs as a house pet.

Jack Russells are a breed that is unaware of their small size. They can often show same-breed aggression to other dogs and are generally fearless, which may cause problems in their social well-being if they attempt to scare off a larger breed. They are normally friendly and good natured, although they are not a breed that will tolerate any form of abuse. They are often known to be aggressive with cats and other small fur-bearing animals so careful consideration should be made when deciding to enter them into a home with hamsters, cats or rabbits.

A well cared for Jack Russell can be expected to live anywhere for 14-21 years. This is due to their lack of in-breeding and positive genes. They are commonly healthy and suffer from very few common health problems. Regular check-ups, good choice in breeders, and plenty of exercise are the keys to keeping this dog healthy.

The breed was created for the purpose of hunting and was created to have high stamina and strong intelligence. They were created to have the courage to seek out a fox that may have hidden underground, without the aggressiveness that would cause harm to either animal. They were used for sport hunting and were blessed with a high-energy and a strong and flexible build.

Jack Russells are known for their bravery and need to protect without aggressiveness. There was a report in 2005 of a Jack Russell named George, who saved five children from an attack by two Pit bulls, the dog was said to have charged at the attacking dogs and held them off long enough for the children to escape. The dog had to later be put down due to injury, but was awarded a medal of bravery for his actions. 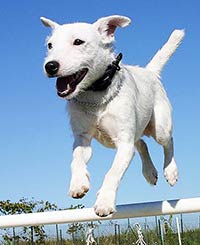 Being intelligent dogs, Jack Russells are a very popular breed in Hollywood. There have been many Jack Russells used in television and movies. They are easily and eagerly trained to perform tricks and simple actions. They are a breed that is bursting with personality and it is easily adorned on the silver screen. Their unique facial expressions and feisty demeanor makes them a perfect candidate for acting. Some famous Jack Russells include Wishbone, an award-winning children’s television series, Milo, from the movie the mask, Eddie, from the sitcom Frasier and the Jack Russell in the movie My Dog Skip.

Though these dogs can make wonderful pets there are a few things to keep in mind when deciding whether or not a Jack Russell is the breed for you: 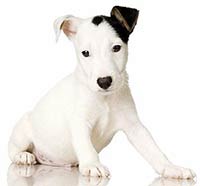 Loving and Affectionate Bundles of Energy

Jack Russells are an intelligent and outgoing breed, they are friendly and full of energy. With the proper care and a loving home they can be a wonderful addition to a family. An owner must remember that this breed was created to exercise both mind and body and needs an outlet to do both constantly. Routine and discipline are keys to good temperament with the Jack Russell breed and with proper rules and regulation you can have a loving and affectionate pet as well as an energetic companion. This may not be the dog for everyone, but if you decide it is the dog for you, with hard work you will be very blessed in your decision.