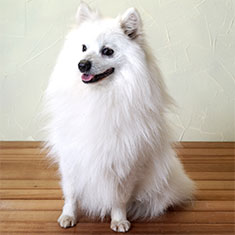 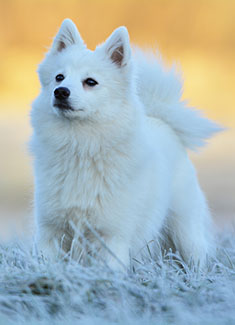 The Japanese Spitz weighs around 11 to 22 lbs.

Japanese Spitz has a thick double coat. Inner coat is shorter and soft, while the outer coat is of medium length.

Japanese Spitzes are companion dogs that need human contact. They are courageous, affectionate, and incredibly devoted which makes them great watch dogs and companions to both elders and children.

Japanese Spitz can be expected to live 10 to 16 years.

Japanese Spitz can do ok in an apartment, but it needs lots of running space off-leash. As such, a securely fenced yard is strongly recommended.

Whether you know this breed as the Nihon Supittsu, the Miniature Samoyed, or the Japanese Spitz, you will fall in love with the lively little white dog as soon as you meet one in person. The dog is similar in appearance to the Pomeranian, the American Eskimo Dog and the Samoyed. So similar, in fact, that the American Kennel Club does not recognize the Japanese Spitz as a separate breed. The majority of kennel clubs internationally, however, do recognize the breed.

The Japanese Spitz was developed by breeding several other Spitz type dogs together, so no surprise, it looks very similar to some of these dogs. The fur is always pure white, and the tail curls up over the dog’s body in the telltale sign of a spitz breed.

Although the different kennel clubs have different standards for size, the Japanese Spitz is always expected to be slightly bigger than the Pomeranian and smaller than the Samoyed, measuring about 12 - 16 inches at the shoulder and weighing about 15 - 20 pounds. 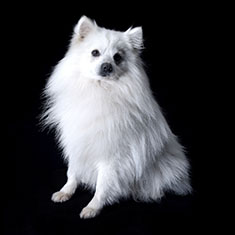 The thick white double coat includes a soft inner layer covered by an outer coat that stands out away from the body.

The muzzle is somewhat pointed on a wedge-shaped face, and the small triangular ears stand up. The nose, lips, eye rims, foot pads and toenails are black, and the oval-shaped eyes are dark, in contrast to the bright white coat.

The thick white double coat includes a soft inner layer covered by an outer coat that stands out away from the body. The really cool thing about the Japanese Spitz coat is that very little sticks to it. In fact, it is sometimes compared to Teflon. If your dog takes a roll in the mud, he or she will likely lay in the sun to dry out, and when totally dry, the dirt will mostly fall off of the fur. A quick brushing will remove any stray remaining dirt, restoring the dog’s pure white coat. These dogs need infrequent baths and typically do not carry any dog odor because of their non-stick fur.

Is the Japanese Spitz a healthy breed?

The only major defect seen in this breed is patellar luxation, where the kneecap dislocates out of its normal position. This defect is no more or less common in the Japanese Spitz than in most other small and miniature dog breeds. Breeders should work to exclude dogs from their breeding stock if they have ever had a litter where the puppies developed patellar luxation. In addition, all potential breeding dogs should be vet checked for looseness in the knee joints before the dog is bred for the first time. 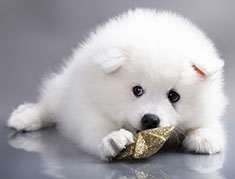 The other health problem seen in this breed is the relatively minor cosmetic issue of runny eyes and tear staining. This is typically caused by smaller-than-required tear ducts which don’t drain the eyes adequately. Alternatively, it can be due to stress or allergies. Many times, the problem will go away on its own after puppyhood.

Most Japanese Spitz dogs live 12 – 16 years, with weight control being a major contributor to longevity.

What temperament should I expect from a Japanese Spitz?

These dogs are highly sociable and want nothing more than to be the littlest member of your family. They love children and other dogs, and will typically get along with other pets in the home as well. Because they are anxious to please you, they are generally easy to train with positive rewards for a job well done.

The Japanese Spitz likes to go for walks, but requires very little exercise. Walking appears to be just a social event for them, not a daily requirement to prevent boredom and to stretch out major muscles.

These little dogs can serve as the family’s watch dog, as their alert and inquisitive nature will lead them to bark when strangers are about. However, they will not guard your property. It’s just not in them to intimidate intruders. Their protective nature may lead them to place themselves between a child and a perceived threat, but they’re not that hard to overcome if someone really wants to get at the child.

Is it hard to care for a Japanese Spitz?

Don’t be intimidated by the beautiful white coat. The dog mostly takes care of keeping him or herself clean. Like a cat, the Japanese Spitz will lick off dirt soon after encountering it.

You will probably brush out the coat twice a week, and bathe the dog every 2 – 3 months. Frequent bathing dries out the skin and fur, removing the oils that are essential to a shiny coat. 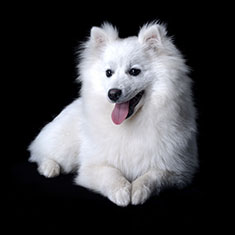 Despite its beautiful white coat, the Japanese Spitz is surpisinly low maintenance.

Be prepared for the dog to blow his or her coat twice annually, in the spring and fall. Molting lasts about a week, and brushing daily or even more often during this time will help you control the amount of fur that gathers under your bed and in the corners of your rooms.

The coat should never be shaved as the double coat insulates the dog in winter and allows cooler air to circulate near the skin in warmer weather.

Tear stains do not have to be removed, but if you wish to, you may wipe around the dog’s eyes with a cloth moistened with warm water, lemon juice or saline solution. There are also commercial products available. A homemade version includes equal amounts of milk of magnesia and peroxide, thickened to a paste with cornstarch. The mixture is massaged into the fur around the dog’s eyes, then allowed to dry. It is rinsed out with warm water or wiped off with a wet cloth. Some enthusiasts encourage adding a teaspoon of cider vinegar to the dog’s water dish each day to increase the pH, which discourages micro-organisms from worsening the tear stains.

Is the Japanese Spitz the right dog for my family?

Shannon Watherston, a breeder from Queensland, Australia, has this to say about her beloved “white wonder” dogs: “It is a common occurrence that people who have had a Japanese Spitz as a pet are no longer able to find satisfaction with any other breed.”

If you’re looking for a great companion dog who is excellent with children and other dogs, is easy to groom, and has low exercise requirements, this may be the breed for you. However, if your budget is tight, you should be aware that this somewhat rare breed may cost as much as $1,500 for a healthy, well-bred puppy.