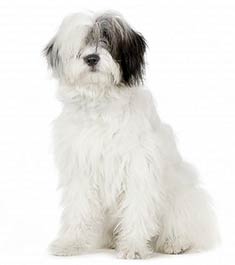 The Old English Sheepdog's profuse shaggy coat should be brushed regularly to prevent matting and tangling. Since their coat can make them overheat in the warmer months, clipping it for the summertime is recommended. Old English Sheepdogs are heavy shedders and do most of their shedding from April to May.

Old English Sheepdogs are prone to hip dysplasia and cataracts.

Old English Sheepdogs can be expected to live about 10 to 12 years.

Old English Sheepdogs love to play and run and require at least a medium sized yard for exercise.

Are you old enough to remember the Shaggy Dog movies with Fred McMurray? If so, you already have a mental picture of an Old English Sheepdog. And “shaggy” is the perfect descriptor. His very long fur covers not only his body, but also his face and eyes.

Where did the Old English Sheepdog come from?

Although the dog certainly comes from Southwestern England, his ancestry is a bit murky. It is pretty clear that the Scottish Bearded Collie was part of the original stock from which the Old English descended. The breed has strong herding instincts, originally used to drive sheep and cattle to market. They have even been known to “help” parents herd their children into bed!

Despite his name, the Old English really isn’t a very old dog, as compared to some breeds that have been around since ancient Egypt. First shown as the “Shepherd’s Dog” in England in 1873, the breed was exported to the United States in the 1880’s. By the turn of the century, half of the ten most wealthy families in America were breeding and showing the Old English Sheepdog. The Vanderbilts, Morgans, and Guggenheims were among early fanciers of this breed. 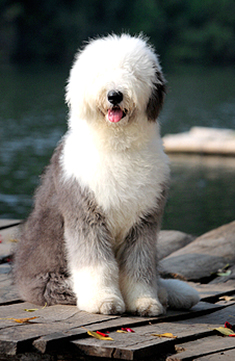 Because the tail was usually docked when the breed was first developed, the Old English Sheepdog is sometimes called the Bobtail. In merry old England, pet owners were taxed, but those who kept working dogs were not subject to the tax. A docked tail was proof of a dog’s working status, keeping the owner from having to pay taxes, regardless of how he really used the dog. Nowadays, the tail may be bobbed or kept long and feathery.

The dog is rather large and square, distinguishable by his long, thick grey and white shaggy coat. Any color of brown or faun is considered a fault. When the tail is docked, it is cut completely off, leaving a rounded rump. The dog stands lower at the shoulder than at the rear, creating a bear-like lumbering gait. Height at the shoulders is 21 inches or above, and the dog’s length is generally the same as its height. There is no specific weight standard, but many of these dogs can weigh up to 100 pounds. 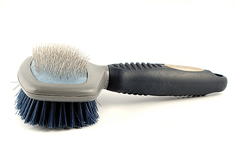 If you own an Old English Sheepdog you'll need a full complement of grooming tools.

What about all that fur?

You guessed it – anything with that much fur will shed…a lot! The dense undercoat falls out all over your house, making vacuuming a nearly daily chore. Some people even save the hair and spin it into yarn. In fact, sheep farmers were known to shear their dogs at the same time as they took care of their sheep each year.

An Old English Sheepdog’s grooming should not be undertaken by the faint of heart! Even when groomed frequently, each session may last as long as three hours. Skip a weekly grooming session, and you’re likely to regret it the next time you sit down to brush out those long locks.

Typically, the dog is made to lie down on a table, with the groomer at the back of the dog. Starting about 1 inch above the spine, gently brush the hair back towards the spine in the opposite direction from which it grows. When this line is smoothly in place, start another line about an inch above the first one. Gently brush out this layer, then start on the next line, moving on down the dog’s side an inch at a time until all layers are brushed out.

Fair warning: no matter how much grooming you do, the dog’s fur will attract leaves, mud, feces, and everything else it encounters like a magnet. As soon as you let the dog inside, his fur loses its magnetism and all of the above will end up on your carpet and anything else the dog comes into contact with. In addition, his beard soaks up water when he drinks, then releases the water into your carpets, your furniture, and the laps of your guests. Similarly, an Old English Sheepdog after a meal looks pretty much like a toddler after a meal. His face will need to be washed every time he eats, and if you don’t wash it, he will – on your clothes and furniture.

For ease of grooming, as well as for cleanliness, many Old English Sheepdogs are clipped regularly, keeping the hair shorter than described in the breed standard.

This enthusiastic, fun-loving dog loves to romp around at play, but is also happy being a couch potato when left without a playmate. The breed is susceptible to separation anxiety when left alone for long periods of time. He gets along well with other pets. Young Old English Sheepdogs are very active and may easily knock over children and the elderly. They also tend to nip at anything that moves, making them inappropriate with small children. They will bark at strangers, but are not aggressive, so they make better watchdogs than guard dogs. 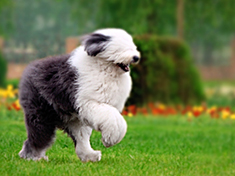 Old English Sheepdogs love to romp and have a good time.

Many Old English Sheepdogs are described as “highstrung” or “neurotic” and require careful socialization to avoid later aggression or skittishness. In addition, young Bobtails are often very rowdy. They must be trained not to jump up before they reach their large adult size.

Are there any health issues with Old English Sheepdogs?

This normally healthy breed lives as long as 10 – 12 years, but is susceptible to hip dysplasia, cancer, and eye diseases such as cataracts and progressive retinal atrophy. When looking at prospective puppies, the purchaser should insist on seeing proof of hip and eye health for both parents before putting a deposit down on any dog. OFA (Orthopedic Foundation for Animals) and CERF (Canine Eye Registration Foundation) certificates are your assurance that the parents have been examined and found to be free of genetic disease. This doesn’t guarantee that your puppy will have no problems, but it does give you a better chance of having a healthy puppy.

Is the Old English the dog for me?

If you want a happy-go-lucky dog who plays well with your other pets and loves to play, this may be just what you are looking for. However, if you don’t have the time or inclination to frequently groom your dog, socialize him well, and train him consistently, you will have trouble with this breed. In addition, if you are part of the white furniture, glass coffee table crowd, you will likely not be happy with the mess these dogs are capable of making on a regular basis.