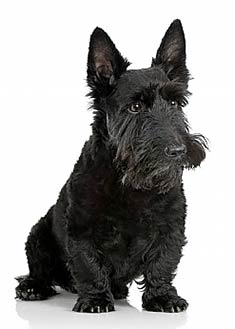 The Scottish Terrier is a sturdy, strong, compactly built small dog breed with short legs and erect ears, offering a lot of dog in a small space. Its sharp expression is augmented by its distinctive beard and eyebrows. The "Scottie" is a loyal dog to its owners and loves to be pampered. 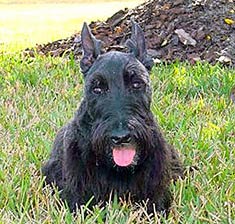 The Scottish Terrier originated in Scotland.

Scottish Terriers range from 19 to 23 pounds.

Scottish Terriers have a hard and wiry outer coat and a soft and short undercoat. The Scottish Terrier's coat sheds very little and only requires a quick daily brush.

The Scottish Terrier is a self-assured and alert dog breed that makes a good watch dog. Loyal with their owners, the Scottie may be aloof with strangers and aggressive with other dogs.

The expected life span of the Scottish Terrier is 11-13 years.

Scottish Terriers will do well in an apartment as long as they get sufficient amounts of exercise.

The Scottish Terrier is in the Terrier group.

This independent, proud descendant of the Scottish Highlands is perhaps best known by his silhouette. From his bearded chin to the tip of his pointed tail, the Scottie is a bundle of muscle covered in coarse, wiry hair. The classic Scottie is black, although they also come in brindle or wheaten colors. The lighter colored dogs are sometimes confused with the Soft-Coated Wheaten Terrier or the West Highland White Terrier. 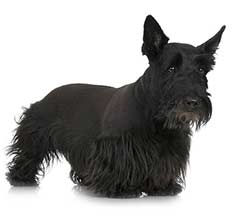 The Scottish Terrier is known for his distinctive silhouette.

Standing about 10 inches high at the withers, the dog weighs somewhere between 17 and 22 pounds. Their large paws are well suited to digging, as they were originally bred to follow their prey into dens during the hunt. The terrier name itself is derived from the same root as the French word "terre", which means earth. There is no doubt that the name was given due to the dog's digging ability. In fact, the dog's strong tail was originally used to pull the dog back out of the holes they would dig trying to find prey.

The Scottish Terrier, also known as the Aberdeen Terrier, is one of five terriers that originated in Scotland to kill vermin and aid in the hunt. The other four are the Sky, Cairn, Dandie Dinmont, and West Highland White. Several of these dogs were originally lumped together under more generic names, so it is not clear exactly who descended from whom. However, it is thought that the Scottie is the oldest of the group.

The Scottie has a hard, wiry long outer coat that is weather-resistant and covers the soft dense undercoat. He will need regular brushing year-round and daily brushing during shedding season. Professional groomers will trim the dog's hair short on the head, ears, tail, and back, leaving him shaggy on the underside and around the legs. Clipping should be done several times a year to maintain the dog's characteristic silhouette and beard.

Are there any diseases I should know about?

Scottish Terriers may live as long as 15 years, but they are prone to epilepsy, Cushing's Syndrome and von Willebrand disease. And, they are susceptible to "Scottie Cramp" when the muscles randomly lock up during exercise for a few minutes. They also have a greater chance of developing cancer than some other breeds.

A dog who is having a seizure will typically begin to drool, his pupils will dilate and his legs will become stiff. He may arch his back and paddle his legs. He may soil himself during or after the seizure. Sometimes, seizures are the result of low blood sugar, heat stroke, brain tumor, poison, nutritional deficiencies, or distemper. However, many seizures have no known cause and are simply treated with medication to disrupt the abnormal brain waves which occur during the seizure.

Cushing's Syndrome is caused by excessive cortisol being released into the system as a result of tumors on the pituitary or adrenal glands, or even as a result of the dog's taking steroids to combat itchy skin. If your dog is drinking a large amount of water, losing his coat, or if his skin is becoming darker, and he is developing a pot belly, you should have him evaluated for Cushing's Syndrome. Treatment involves medication to counteract the effects of the cortisol.

Von Willebrand's Disease occurs in many animals, including humans, pigs, dogs, and rabbits. It is a genetic disease, similar to hemophilia, although less severe. Affected dogs will show excessive bleeding when they teeth, have surgery, or when their nails are cut too short. They may also bruise easily and suffer from internal bleeding after only a slight injury. A DNA test, available from Vetgen, can detect the presence of von Willebrand's disease so you know whether or not to take special precautions with your Scottie.

Cancer kills about one in four dogs over the age of two. In Scottish Terriers, the most common types are bladder cancer, and malignant melanoma, gastric carcinoma.

Will a Scottie make a good watchdog?

These dogs, although small, pack a powerful punch. They don't bark randomly, so they make good watchdogs because a bark indicates the presence of a stranger. They are protective and fearless, and don't appear to realize they are small dogs. Properly socialized at an early age, the breed is good with children who are known to them, but aloof with strangers of all ages. If you have other dogs in your home, you must be aware that the Scottie may be aggressive unless introduced to the other dogs while he is still young.

Does the Scottie require a lot of exercise?

Like most terriers, the Scottie is full of energy. He has been dubbed the "diehard" because of his endless determination to get what he wants. (This nickname is thought to have inspired the naming of the Earl of Dumbarton's Royal Scots Regiment as Dumbarton's Diehards.) However, he does not require a large area in which to play. He may be perfectly suited to small homes or apartments, as long has he is given daily walks in order to burn off his energy. He should always be walked on a leash because of his hunting drive. He is just as likely to run off after a squirrel or rabbit as he is to stay by your side.

You must also provide mental exercise for this intelligent breed. Left to his own devices, the Scottie will become quickly bored and begin digging or causing other problems. You can overcome this by providing playtime that requires the dog to think. Place a ball under a throw rug and make him figure out how to find it. Stuff a treat inside a Kong toy so he can find a way to get it out.

The Scottie has been the "First Dog" more frequently than any other breed. Franklin D. Roosevelt had several Scotties during his four terms in office, most notably his constant companion Fala. And the younger President Bush has Scotties named Barney and Mrs. Beasley.

The character "Jock" from Lady and the Tramp was a Scottie.

The most popular Monopoly game token is the Scottie dog.

The Scottie is the official mascot of Carnegie Mellon University, Agnes Scott College (Decatur, Georgia), and the College of Wooster (Ohio).