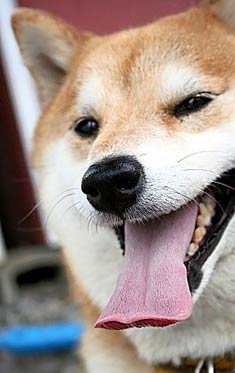 The Shiba Inu is a typical northern dog breed, with a moderately compact, powerful body, a curled tail and small erect ears. Shiba Inus move with speed and agility in a smooth, effortless gait. They have a good natured, bold expression.

The Shiba Inu originated in Japan.

Shiba Inus are typically red, black or red and black. Tan or white markings are permissable.

The Shiba Inu has a harsh and straight double coat. This dog breed has a shedding coat that requires regular brushing.

The Shiba Inu is an independent and strong-willed dog breed that requires consistent training. Affectionate and loyal to its owner, the Shiba Inu can be initially reserved with strangers.

The Shiba Inu is susceptible to patella luxation and hip dysplasia.

The expected life span of the Shiba Inu is 12 to 15 years.

The Shiba Inu will do okay in an apartment provided it gets a sufficient amount of exercise. The Shiba Inu is a good dog breed for the elderly or disabled if they are able to walk and train the dog. It can be vocal, making it a good watchdog candidate.

The Shiba Inu is in the Non-Sporting group.

The Japanese were kind enough to contribute six breeds to the dog world, the Shiba Inu being the smallest of the six. Most of these Japanese breeds originated as early as the 3rd Century B.C. The other five breeds from Japan are the Akita, the Kishu, the Hokkaido, the Shikoku, and the Kai. In 1936, the Shiba Inu was declared a national cultural monument of Japan, but the breed was nearly driven to extinction during the Second World War, when bombing raids and a widespread distemper epidemic killed all but three bloodlines, known as the San'in, Mino, and Shinshu, indicating their regions of origin.

The Shiba Inu is a national monument of Japan.

The Shiba was brought to the United States in the 1950's and was recognized by the American Kennel Club in 1992, where it was added to the Non-Sporting Group. Less well known than its larger Akita cousin, the Shiba Inu is an agile dog originally bred for hunting in mountainous terrain.

The Shiba is thought to be named after the Japanese word for "brushwood", indicating their early use in hunting animals which inhabited the brushwood bushes of Japan. Alternatively, some theorize that the red color of the Shiba's coat is similar to the color of brushwood leaves in the fall, leading to the breed's name. "Inu" is simply the Japanese word for dog.

The Shiba Inu, like many dogs, has a double coat, with the soft, dense undercoat being blown (shed in large chunks) twice each year. The undercoat is cream, buff, or grey. The straight top coat may be red, black and tan, or sesame, which is red with black-tips. Urajiro markings are a pattern of white showing on the dog's underside, which are in contrast to the dog's primary coat color. Some shibas have a creamy white or pinto topcoat, but these are considered less desirable because the urajiro markings cannot be seen.

Males generally stand about 14 - 17 inches high and weigh about 23 pounds, while females weigh in at 17 pounds and stand about 13 - 16 inches tall at the withers. The dog is very quick and agile, consistent with his history as a hunter. He has a black button nose and small, pricked-up ears. His tail resembles that of a Husky or Chow-Chow, curling up over his back. The Shiba puppy is absolutely irresistible, resembling a very small Husky or Akita.

With his high energy level, the Shiba is one of the dogs famous for being hard to train, not due to a lack of intelligence, but rather because of a fierce independent streak. They are very possessive, guarding their food, toys, and even their humans ferociously from other dogs or from children. Early socialization is vital to make training easier and to prevent violence springing from the possessiveness. Harsh training will not be well-accepted by this breed. Positive reinforcement and rewards are the far better training method to use, resulting in much faster learning.

Shibas are famous for hating restraint and will resist collar use at first. Some even carry this hatred of the leash for their whole lives! It is best to let your puppy wear a loose collar for a few days, then add a leash and let him lead you for a few days. Once he stops fighting this, begin to gently lead him where you wish to go. 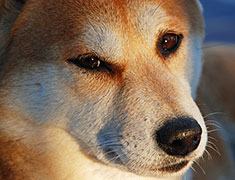 Shiba Inus have some cat-like tendencies.

The Shiba resembles a cat in that this breed has a huge interest in keeping himself clean. He will often lick his paws and legs, and can be seen to avoid puddles and mud when he is outside. This bodes well for potty-training, as the dog has no impulse to mess in his den.

Shiba owners are well acquainted with the Shiba scream, a loud, high-pitched noise the dog makes when excited. He may squeal when he is unhappy, provoked, wildly excited, or extremely happy.

Shiba Inu guardians need to be prepared for the fact that these are very active dogs. You don't necessarily have to have a huge back yard for them, as they are perfectly happy to race around inside your house. However, you should plan on taking the dog for a daily walk to keep him in tip-top shape.

The Shiba temperament is described by three Japanese words: kan-I, ryosei, and sobuku, loosely translated as brave, gentle, and refined. The breed has been described as "brave and bold with composure and mental strength" and as "artlessness with a refined and open spirit". The other description, "spirited boldness", is really a euphemism for the aggression seen in un-neutered males. Prospective guardians of a Shiba need to be prepared for this, before making a lifetime commitment by purchasing a dog.

The Shiba Inu is a generally healthy dog, although there are some diseases to watch out for. Shibas are prone to allergies, especially to fleas. Flea allergy dermatitis (FAD) can cause reactions ranging from very mild to very severe, and can be treated with medication in most cases. Topical remedies are used initially, but severe cases may require regular injections of cortisone.

Like many small breeds, the Shiba is prone to patellar luxation, where the kneecap is displaced from its normal position. A mild case can normally be treated by your vet's simply pushing the kneecap back into place, while more severe cases may require surgical repair.

Somewhat surprisingly, given his small size, the Shiba also has a tendency towards hip dysplasia. Of 889 Shibas evaluated in 1997, about 78% were found to be in good or excellent hip condition, while as many as 8% showed signs of dysplasia.

The Canine Eye Registry Foundation finds that about 18% of Shibas have some sort of eye problems, which are more common in females than in males. The most common of these problems is juvenile cataracts which commonly occur around two years of age. Because cataracts may lead to blindness, it is important to have your dog examined, and to make breeding decisions based on a clean bill of eye health.