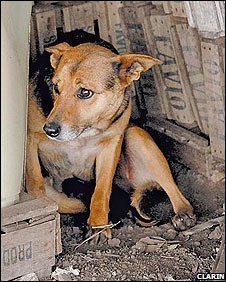 Have you heard about China, the hero dog from Argentina? Apparently, she is a better mom than her 14-year old human neighbor. Check out this story from the small town of La Plata, about 40 miles south of Buenos Aires.

China had recently had pups when a 14-year old girl gave birth in a field near China’s home. The scared girl (who wouldn’t be at age 14?) abandoned the baby in the field.

China‘s dad, Farmer Fabio Anze heard a baby crying a few hours later and went out to investigate. China had apparently found the baby in the field and carried back to her pen, where the little girl was laying next to China’s own pups.

Hospital authorities say the baby is in remarkably good condition, considering the temperature at the time was near 37 degrees! The teen-aged girl later came to the hospital, saying she was the mother. No word on if any charges will be filed, or if she will be given the help and support she obviously needs.

2 thoughts on “China, the hero dog”