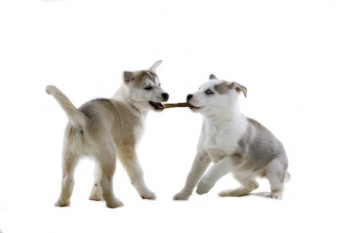 A new study discussed on the Discovery Channel documents that male puppies often put themselves in submissive positions, allowing their girl friends to win the game, all in the interest of keeping the playtime going.

Camille Ward, author of the forthcoming book, Relationship-Based Dog Training,  states, “A play bow is a signal that dogs use when they want to communicate playful intentions to a potential play partner.”  She continues, “We found that self-handicapping tends to occur in conjunction with play bows.”

The play bow works coming from humans, too.  If your dog has become lazy, try giving him a play bow.  Simply lean down, placing your palms flat on the floor and tucking your head down as low as possible.  Excitedly call your dog’s name.  My dogs recognize this as a sign of willingness to play and will come bounding over to see what’s going on.

The Discovery Channel study found that females were more likely than males to initiate play with their own gender, but that males were eager to play with females for as long as possible.  (Apparently, this is true among all species!)  Once play began, the males would lick the muzzles of their female playmates, leaving themselves vulnerable to being bitten, just to make sure the females would continue playing with them.

Another scientist, Barbara Smuts of Stanford University, has studied play behavior in many species.  Her take on it is that dogs may be less obsessed with winning than primates are.  The male dogs are willing to lose at a short-term game in order to produce a long-term gain – i.e. that of maintaining fun relationships with female friends.