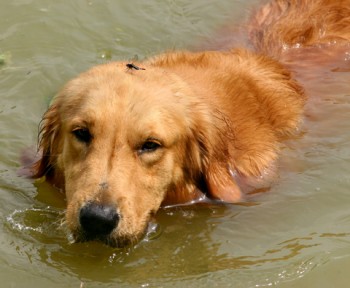 As most of you know, I’ve been trying to get our dogs into dock diving, but so far no luck.  We tried with Cooper at the Pet Expo in Columbus last month – who knew a Vizsla would be scared of the water?

So, we decided it might be good to find a shallow pond and try to get all four dogs to at least get their feet wet – trying to break them in slowly.  We had located just such a pond behind one of the local schools, so we went there on Saturday morning.

By the time I got the last dog out of the car, the kids had taken Maggie to the edge of the pond.  Her beautiful Golden fur was already muddy up to the knees.  That should have been my first clue.

But, I’m pretty stubborn, so I thought, “Maybe if I wade into the edge of the pond, they’ll all come with me.”  I slogged through the mud at the edge of the pond and kind of hopped into the water…and immediately sank up to my knees in mud!  Very nearly slid down on my butt, but was able to stop myself, thank goodness.  I’m not sure I would have been allowed to ride in the van if my jeans were muddy all the way up.  Bad enough they were muddy on the bottom half.

And the dogs didn’t follow me, either!  Just from being at the edge of the pond, I now had three dogs with muddy legs, and I was stuck in the mud to my knees.  Penny, the Beagle, was the only one with enough sense to stay far, far away from the mess.

So, I handed off the leash to the kids and tried to get out of the pond. You guessed it, I couldn’t even turn around, much less extricate myself.  I won’t go into the details of my gracefulness, but let’s just suffice it to say that my shoes are still stuck at the bottom of the pond.

But we’re not giving up!  Saturday night we went to a party at the home of Buckeye Dock Dogs’ Vice President, Steve Bacon.  A great time was had by all.  But somehow I ended up agreeing to take the required tests to become a dock diving judge.  Wish me luck!  I’ll let you know how that goes after my certification exam at the national competition at the end of May.

One thought on “Hoping Your Dogs’ Weekend Was Better Than Mine!”