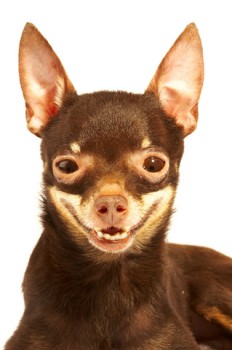 It seems like this week will never end!  I could use a laugh – how about you?  From our friends at basicjokes.com:

The Taco Bell Chihuahua, a Doberman and a Bulldog are in a bar having a drink when a great-looking female Collie comes up to them and says, “Whoever can say liver and cheese in a sentence can have me.”

So the Doberman says, “I love liver and cheese.” The Collie replies, “That’s not good enough.”

The Bulldog says, “I hate liver and cheese.” She says, “That’s not creative enough.”

A clergyman was walking down the street when he came upon a group of about a dozen boys, all of them between 10 and 12 years of age.

The group surrounded a dog. Concerned the boys were hurting the dog, he went over and asked, “What are you doing with that dog?”

One of the boys replied, “This dog is just an old neighborhood stray. We all want him, but only one of us can take him home. So we’ve decided that whichever one of us can tell the biggest lie will get to keep the dog.”

The reverend was taken aback. “You boys shouldn’t be having a contest telling lies!” he exclaimed. He then launched into a 10-minute sermon against lying, beginning, “Don’t you boys know it’s a sin to lie?” and ending with, “Why, when I was your age, I never told a lie.”

There was dead silence for about a minute. Just as the reverend was beginning to think he’d gotten through to them, the smallest boy gave a deep sigh and said, “All right, give him the dog.”

A local business was looking for office help. They put a sign in the window, stating the following:

“HELP WANTED. Must be able to type, must be good with a computer, and must be bilingual. We are an Equal Opportunity Employer.”

A short time afterwards, a dog trotted up to the window, saw the sign, and went inside. He looked at the receptionist and wagged his tail, then walked over to the sign, looked at it, and whined. Getting the idea, the receptionist got the office manager. The office manager looked at the dog and was surprised, to say the least; however, the dog looked determined, so he led him into the office.

Inside, the dog jumped up on the chair and stared at the manager. The manager said, “I can’t hire you. The sign says you have to be able to type.”

The dog jumped down, went to the typewriter, and proceeded to type out a perfect letter. He took out the page and trotted over to the manager and gave it to him, then jumped back on the chair.

The manager was stunned, but then told the dog, “The sign says you have to be good with a computer.”

The dog jumped down again and went to the computer. The dog proceeded to enter and execute a perfect program that worked flawlessly the first time.

By this time, the manager was totally dumbfounded! He looked at the dog and said, “I realize that you are a very intelligent dog and have some interesting abilities; however, I still can’t give you the job.”

The dog jumped down and went to a copy of the sign and put his paw on the sentences that told about being an Equal Opportunity Employer.

The manager said, “Yes, but the sign ALSO says that you have to be bilingual.”

The dog looked at the manager calmly and said, “Meow!”

Hope you enjoy your day!

One thought on “Friday Funny: A few clean dog jokes for your enjoyment”