Are you, like the Obamas, considering adopting a shelter dog?  Bark Busters, purportedly the world’s largest dog training company, offers these tips for keeping everyone safe. 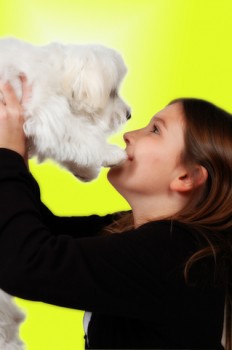 END_OF_DOCUMENT_TOKEN_TO_BE_REPLACED

Just saw the news today, that thanks to 50,000 signatures on the petition and some political pressure, the military is now ready to allow Ratchet to come home from Iraq, possibly as early as Sunday.  If you don’t know what I’m talking about, click here for the original post.

Sergeant Gwen Beberg never dreamed her compassion for a dog she rescued last May from a burning pile of trash in Baghdad would spark such a fight.  Approaching the end of her tour in Iraq, the good sergeant was transferred in preparation for returning to the United States next month.  You guessed it, the military will not allow Ratchet the dog to accompany Gwen even to her new base, let alone back to the U.S.

“I just want my puppy home. I miss my dog horribly,” Sergeant Beberg, 28, e-mailed her mother after being separated from Ratchet.

The military said in a statement that Customs procedures often prevented foreign animals from entering the US without vaccination records and other medical documents.  Although official military policy prohibits deployed soldiers from bringing home strays, the Department of Defense has been known to make exceptions.  Working with Operation Baghdad Pups, a program set up by the International SPCA, soldiers have been able to bring home 50 dogs and 6 cats from Iraq.

Terry Crisp, of Operation Baghdad Pups, flew to Dubai yesterday and is due to arrive in the Iraqi capital tomorrow to speak to members of the military. “Iraqis view dogs and cats as rats, as nuisances, carriers of disease,” she said, noting that US soldiers had rescued many abused animals, such as a puppy that was being kicked by a circle of Iraqi men.

Crisp’s colleague, Larry Garrison, makes that point that pets can serve an important function by helping soldiers readjust to normal life when they return home.

If you agree, sign the petition to bring Ratchet home!

Did you know?  May 4th – 10th is not only Be Kind to Animals Week, it is also National Pet Week.  AND, the month of May has been designated as “Go Fetch!  Food Drive for Homeless Animals Month.”  So why not consider fetching some food and taking it to your local shelter. Even NASCAR star Kyle Busch is getting involved in helping shelter dogs.