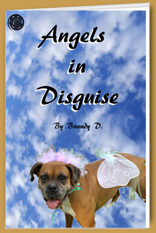 I received an e-mail the other day from Kyla Duffy of Happy Tails Books, regarding some exciting things they have in the works.  I love free stuff!

END_OF_DOCUMENT_TOKEN_TO_BE_REPLACED

I don’t know where this happened, or who the guy is, but what a nice thing he did!  Please let me know if you have any info on this.  How great to see a happy ending!

END_OF_DOCUMENT_TOKEN_TO_BE_REPLACED 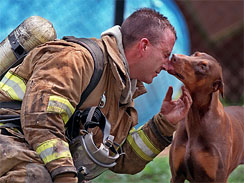 CBS news reported yesterday on a unique bond between a certain Charlotte, NC firefighter and the dogs he finds at fire scenes. About 9 or 10 years ago, he rescued Cinnamon, a beautiful Dobie from a house fire, and the Charlotte Observer ran this picture which attracted worldwide attention.

Now, last week, Firefighter Jeff Clark is at it again. He and his crew arrived at a fire where a man stood outside with a mama dog. Inside, her nine puppies were in a box in the utility room. Clark and another firefighter were able to take a blanket and rescue all nine pups.

Thanks for doing such a great job Jeff!