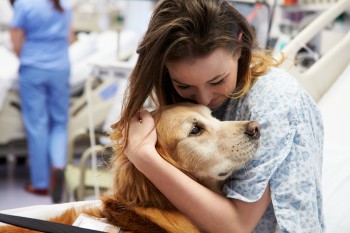 We receive a publication called “Renew” from UnitedHealthcare every so often, and I thought the article on “Pawsitivity” in the newest issue might be of interest.

Sigmund Freud often brought his Chow, Jofi, to therapy sessions. Freud felt that the dog had a calming effect on patients. He even claimed that Jofi’s response to a patient helped with his initial evaluations.

These days a growing group of animals is following in Jofi’s paw prints as therapy animals. What began as a way to cheer up residents in nursing homes and assisted living centers now helps patients of all ages and health conditions.

The animals need only basic obedience training and a gentle temperament.

“These visits are strictly social,” says Mary Margaret Callahan, National Director of Program Development for Pet Partners. The group is a leader in promoting animal therapy. “The animals are there simply to interact with patients.”

Science confirms the benefits of therapy pets, too, both mentally and physically. In a 2012 study published in Pain Medicine therapy dogs visited patients who waited for appointments in an outpatient pain clinic. The patients studied reported significant improvements in pain, mood and other measures of distress.

You don’t have to be ill to benefit from spending time with animals. Walking your dog, for example, can be a nice way to get some exercise and socialize, which may also boost your spirits.

“We believe in the power of paws,” says Christine Thompson, UnitedHealthcare program director. “It’s a no-cost goodwill gesture that can really benefit our members.

“When we spend time with animals, ” Thompson adds, “they train us to slow down, pay attention and notice what’s going on around us.” It may just be one of the easiest health therapies around.

One thought on “The Importance of Therapy Animals”