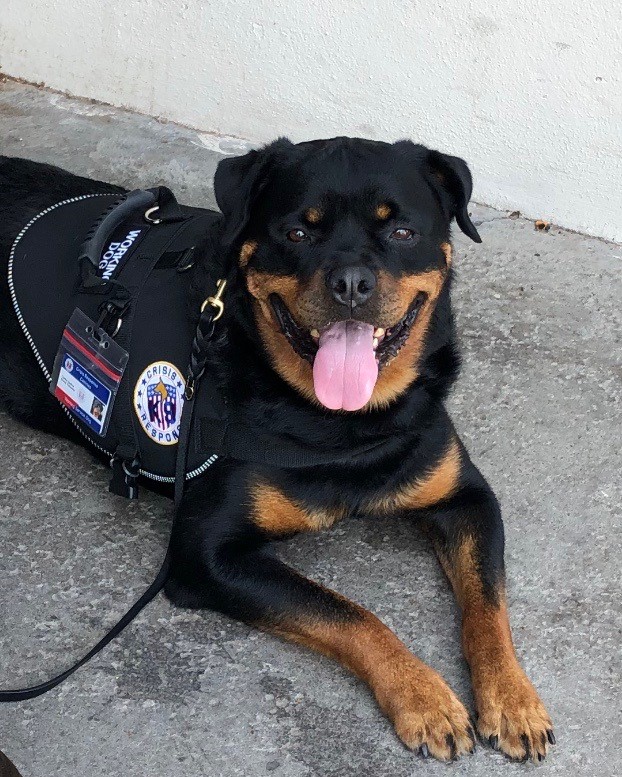 This week, doggies.com is featuring the winners of the 20th AKC Humane Annual ACE Awards.

Today’s post features the winner in the Therapy Dog category. “Gunther,” a Rottweiler owned by John Hunt of Blackwood, New Jersey. “Gunther,” officially known as Bang’s Aleutian Sky CD RE THDD CGCA CGCU, is a six-year-old Rottweiler, certified by the Alliance of Therapy Dogs and owned by John Hunt. In 2016, John Hunt and Gunther deployed as a therapy dog team to Orlando, FL to provide comfort to the grieving victims and families of the Pulse Nightclub shooting.

Since then, they have deployed to: Las Vegas, NV in the wake of the Mandalay Bay Hotel/Route 91 Harvest Festival-mass shooting, Sutherland Springs, TX after the First Baptist Church-mass shooting, Parkland, FL following the Marjory Stoneman Douglas High School-mass shooting, Pittsburgh, PA after the Tree of Life Synagogue-mass shooting, the incident at the municipal building in Virginia Beach, VA, and most recently, El Paso, TX after the active shooter incident. During deployments, John and Gunther spend long days working with the victims and their families and spend their nights comforting the EMTs, Police, Firefighters, and on-site support crews.

When they are not busy traveling the country supporting victims of our nation’s tragedies, John and Gunther can be found working within the AtlantiCare health system and Regional Medical Center providing smiles and love to patients and their care-givers. They also provide local visits throughout NJ supporting celebrations of life at high-schools and colleges and giving educational presentations to a range of organizations on the deployment management of active shooter cases.

In December 2018, Gunther’s owner, John co-founded the non-profit group, Crisis Response Canines, to provide training and organization to build a nationwide network of highly-trained crisis response canines who would be ready to deploy for support and assistance when other mass tragedies occur. Gunther’s work as a therapy dog has helped victims across the nation, and the bond that John and Gunther share brings smiles to faces in the most difficult of times.

Congrats to Gunther and John!