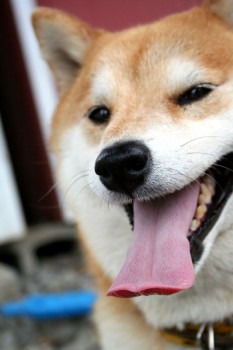 Summertime is upon us, and at least in the Midwestern US, it is finally starting to heat up outside.

Because dogs don’t sweat, they have to lower their body temperatures by panting, which is much less efficient.  This makes them much more susceptible to heat-related illnesses such as heat stroke.  Dogs with short muzzles and those with any type of airway disease are particularly affected.

What should you do to protect your dog from the ill effects of the heat?

Make sure your dog has shade and plenty of water while he is outside during the summer months.  Even if he’s not normally an inside dog, would it really kill you to let him in during the hot, humid days of summer?  I’m not suggesting you give him the run of the house if that’s off-limits, but even the basement or the garage would help, particularly if you open some windows to allow a breeze.

NEVER, NEVER, NEVER leave your dog in a car, even if it’s only for a few minutes.  The inside of a car can overheat in a very short amount of time.

If you crate your dog, make sure the sides of the crate allow adequate air flow.

If you notice your dog breathing frantically and his tongue is bright red, he might be suffering from heat stroke.  The dog will often vomit, and his saliva will be thicker than normal.  Untreated, the dog will begin to stagger around and will eventually lose consciousness before dying.  If you suspect heat stroke, hose your dog down or immerse him in cool water.  Even if it’s not heat stroke, this will not do him any harm.

Take a rectal temperature to confirm that the dog is overheated.  If his temperature is as high as 106 degrees, you should give him a cold water enema.  Your goal is to get his temperature below 103 degrees as quickly as possible.