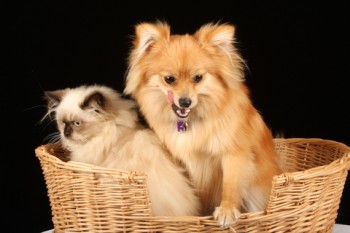 Parade Magazine came out with their Pet Owners’ Edition this past weekend, and it included an article called “The Battle of Dogs vs. Cats“.  They only came up with six categories of why dogs were better, but I was able to find a few more.

10.  Stamina:  Cats are more like sprinters, while dogs are marathoners.  Evidence:  the dogs who run the Iditarod cover 1100 miles in less than 2 weeks.

8.  Fastest:  Greyhounds race at about 40 miles per hour, while house cats can cruise at about 30 mph.

5.  Intelligence:  The average dog can learn 165 dogs, roughly equivalent to a 2-year old human.  Cats get something like 35 words, max.

4.  Sociability:  Everyone knows dogs come when you call.  Cats send a staff member to take a message.

1.  Variety, the spice of life.  While there are different breeds of cats, there is far less variability between breeds than what dogs have.  The wide variety of dogs available means everyone can find one that matches their idea of a dream dog.

Now, before all of you cat lovers write nasty letters, take note that I have 2 cats myself & love them dearly.  According to the article in Parade, cats win in the following categories:  Agility, hunting prowess, longevity, and independence.)  Parade invites you to join in the debate if you disagree.  While you’re on their site, check out their picks for the top pets of the year.

2 thoughts on “Tuesday Top Ten: Reasons Why Dogs are Better Than Cats”