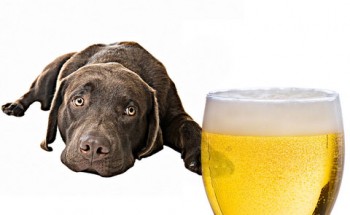 Apparently beer brewed especially for dogs has been around for a while, but it was news to us until we saw this article.

The Branding Villa Pub in England is now offering a non-alcoholic beer for dogs, flavored with meat extract. The pub is also offering up dog-friendly food including Sunday roast with “cat-flavored” gravy (made with beef and fish sauce, not actual cat).

In the U.S. we have Bowser Beer, another non-alcoholic brew. This one is made with barley malt and either chicken or beef, and in the Netherlands they brew Kwispelbier.

There are some dogs out there that already have a taste for beer, so if your dog is one of them you now have some canine-friendly, non-alcoholic options that are probably more palatable (to the dog, not you) and more healthy since they do not contain alcohol.

Have you ever given your dog beer (or has your dog gotten into some on his own)? Have you sought out beer brewed specifically for dogs? Let us know in the comments!

2 thoughts on “Beer for Dogs?”