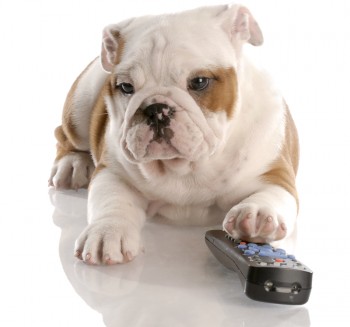 Today we welcome guest blogger Kate Voss to the doggies.com blog community. Kate Voss is an entertainment writer who adopted her first chow/shepherd mix in 2012. When her puppy was young, it suffered from severe separation anxiety, and through training and routine, is now a happy, healthy pup.

Dogs may bark at the television when they see another dog on screen, or perk their heads up when they hear an intriguing noise come from the TV set, but do dogs actually watch television and understand what they are looking at?

In previous years, the answer to that question would have likely been a resounding “no”. Before modern television and improvements such as high-definition and higher refresh rates (which help us see a moving image instead of just a series of still images), dogs would have seen the television screen as a flickering mess of incomprehensible images. However, with recent updates to television technology, dogs are more likely to be willing to snuggle up and enjoy that reality show or morning news with you. A new subscription television channel, DOGTV, claims to have solved these problems and created content specifically for the canines in our lives.

DOGTV claims to be the first ever channel designed solely for canines and features dog-oriented content airing 24/7 (so far it’s only available online, from Roku or with certain DirectTV packages). Examples of the short, six minute programs include scenes of grassy fields, animals and bouncing balls. According to Bonnie Vieira, a spokeswoman for DOGTV, the creators of the show spent three years researching how dogs react to different stimuli, and the channel has also adjusted the colors and sound levels so that each program caters to dogs’ vision and hearing, rather than to humans. Many of the programs are meant to be instructional, such as the segments that feature silent vacuum cleaners in order to help dogs become more accustomed to seeing these otherwise nerve-wracking machines without their terrifying noise. Others are meant to relax, stimulate or entertain your dog.

If dogs will actually watch it, the channel appears to be an innovative and beneficial solution for dog owners who have to spend the majority of the day away from home and dog, and for pups who suffer from separation anxiety. An additional benefit is that DOGTV supports the Humane Society’s Pets for Life program.

Will it actually work?

Some dogs simply don’t respond to television and not every dog will react the same way to DOGTV, so before you invest in the new network, it would be wise to determine whether your dog will actually watch TV. Some dogs are primarily smell and sound-oriented and will not find entertainment in watching television. One factor that will determine whether or not your dog will watch the TV is the placement of the television and the camera angle. Televisions that are placed high up on a wall will most likely not be viewed by your dog — they are not going to look up that far just to catch a glimpse of whatever happens.

But for dogs that do enjoy watching the screen, DOGTV can be a great addition to your stay-at-home dog’s daily routine. DOGTV may also help soothe the bad behaviors associated with separation anxiety and boredom, such as barking, destruction and indoor defecation.

DOGTV should really only be used when you are not in the home. Obviously, when you are home, it is better to spend quality time with your dog by taking them on walks or making time to play. Having a new television program is not meant to replace vital exercise time with your four-legged friend. However, to help entertain and calm your pup while you are away, DOGTV or other visual and auditory stimulation may just be your solution.