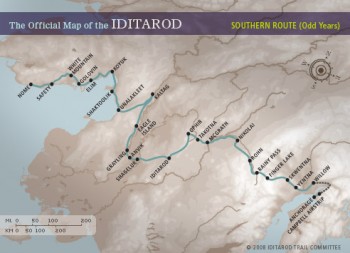 The ceremonial start of the 46th Annual Iditarod is this Saturday, and Rachel D’oro at the Associated Press reports on a few of the challenges they will be facing this year…other than the normal snow, ice, and freezing temperatures.

Earlier this year, Dallas Seavey was accused of doping his dogs with the opioid pain killer Tramadol, an accusation that was never proven and that he firmly denies. He has decided to sit out this year’s race in protest of how he was treated. Instead he will be racing in Norway this month.

Last year’s race tragically saw five dogs die. It used to be that at least one died every year, but several years have passed with no deaths, and the race committee has stepped up its veterinary assistance on-site. However, three dogs died during the race, one was hit by a car, and one died while being life-flighted to an animal clinic for treatment of hypothermia.

The People for the Ethical Treatment of Animals (PETA) will be protesting both the ceremonial start on Saturday and the official competitive start on Monday, as well as at the finish line in Nome. They state that the dogs receive brutal treatment at the hands of the mushers, causing horrible injuries. Race organizers point to “manipulative” information from PETA and other activist groups as the reason why major race sponsor Wells Fargo severed ties to the event last spring.

As I said, there are often dogs that die, but I have a hard time saying the mushers are being brutal, other than that mushing is an inherently brutal sport for both the humans and the dogs. These dogs are the mushers’ livelihood, and they treat them with commensurate care.

Race organizers keep coming up with means to make the race safer, including mandatory rest stops and mandatory veterinary inspections of each dog along the route.

Mushers bring more dogs than are needed, in order that sick dogs can be dropped off with volunteers if they become ill or injured. The dogs wear booties to protect their feet now. In the past, this was not the case, and one of the chief PETA complaints is how beat up the dogs’ feet become while racing. This may have been true when booties were not the norm, but they are now.

Last, but not least, there are many who take issue with the Iditarod’s governing board, saying they are not doing enough to make sure the race survives all of these challenges.

Check back here often during the race for standings and stories of interest over the next ten days or so.