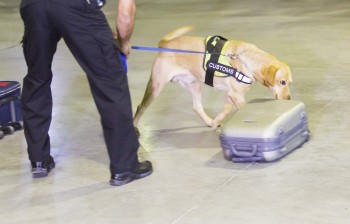 From the American Kennel Club:

The U.S. imports 80-90% of its bomb- sniffing dogs from overseas breeders. Increasing demand and a shortage of dogs places U.S. national security in unnecessary jeopardy. HR 4577 creates a path forward to improve standards and capacity for explosives detection dogs and encourages domestic breeding programs. Please contact your Senators now and ask them to urge Senate leadership to advance HR 4577. See below for more information.

Explosives detection canines are a critical resource used by U.S. troops overseas for force protection, and for domestic law enforcement and security to assure the safety of citizens at airports, stadiums, political gatherings and other public venues.

The consensus of experts recognized that U.S. experts have the ability, expertise and desire to establish decentralized American breeding, raising and training facilities that not only meet America’s needs, but can also produce some of the best explosives detection dogs in the world.

Turning this expertise into a practical solution will require the establishment of sound technical, behavioral and medical standards, with insight and experience from both private sources and government agencies.

The Domestic Explosives Canine Capacity Building Act (HR 4577), which passed the U.S. House in January of 2018, provides a model to achieve this goal. It directs the Transportation Security Agency (TSA) to establish a working group of representatives from TSA, the Department of Homeland Security (DHS), national canine associations with expertise in breeding and pedigree, universities with experience related to explosives detection canines and canine breeding, and domestic canine breeders and vendors to establish these standards and present them to DHS.

Support for HR 4577 and US detection dog breeding and training programs will improve safety and security for Americans at home and abroad. It also demonstrates one of the important values of American dog breeders and their dedication to purpose-bred dogs.

Write to your elected officials and ask them to urge the Senate Commerce Committee to place HR 4577 in the text of Federal Aviation Administration Authorization Act (S. 1405).

I am a resident of your state, a dog lover and a voter. I am extremely concerned about the impending shortage of high- quality explosives detection dogs that help keep Americans safe. HR 4577, which passed the U.S. House in January, establishes standards and a working group to help address this national security issue by making American-bred dogs available to meet our growing reliance and demand. This measure could be added to the FAA authorization (S 1405) this fall. Please urge Senate Commerce Committee Leadership to advance this measure as soon as possible.

What say you? There’s a lot of reasons to contact your legislators these days, no matter which end of the political spectrum you fall on. Here’s another idea to add to your calling / writing list!