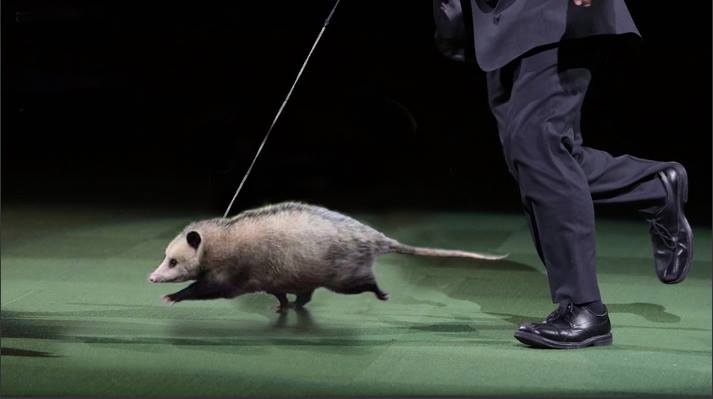 From today’s Facebook feed, courtesy of #AKCFamilyDog. (Check the date)

The American Kennel Club is proud to announce the addition of a new breed to the Terrier Group, effective April 1. The Silver-Coated Pouch Terrier is known for his hardy constitution and characteristically “wobbly” but surprisingly efficient movement, capable of tremendous reach and drive. Like so many breeds, the history of the SCPT is lost in the mists of time, but we know that his association with humans reaches back to antiquity. His lush, silver-sable double coat needs only minimal maintenance, requiring a bath only about once a year or whenever he becomes smelly. A defining characteristic of the breed is his gently rounded (though not roached) back, with his long, somewhat hairless tail carried low and continuing the graceful curve of the topline. The tail is traditionally undocked.

Fanciers especially praise the breed for ease in puppy-raising, as the dams have a habit of carrying the litter around with them in the female’s unique abdominal pouch until the pups are ready to go to their new homes. Like most terriers, the “Pouchie” (as he is known by his adoring fans) can be fierce as needed when confronting his prey, but otherwise he is very docile and largely goes about minding his own business at a slow pace, so he makes a wonderful companion for the owner with a more sedentary lifestyle. The breed is also well suited to owners with insomnia, as the Pouchie tends to enjoy activity during the night and into the wee hours of the morning.

With the breed’s stubbornness and independence, training can be a challenge, and a lack of response to sensory signals such as bright oncoming lights can cause frustration for the trainer. The breed is not recommended for the agility aficionado; although they are excellent climbers and manage the A-frame with astounding skill, they seem incapable of jumping even the smallest of hurdles.

The Pouchie comports himself well in the show ring, although as outlined in the standard judges should note that the bite is not to be examined, and the breed is not to be sparred. Experienced exhibitors know to always remember that if the Pouchie feels threatened he may suddenly collapse in the ring and will resist any attempts to get him to resume the down-and-back or whatever else he was supposed to be doing. If this occurs, it is recommended that the steward have the exhibitor gently drag the entry to a safe location outside the ring. It will also be the steward’s job to reassure any spectators or novice exhibitors who may be alarmed at the Pouchie’s apparent lifeless state that he will in fact be OK in several hours.

Please join us in welcoming this handsome and highly adaptable breed to the Terrier Group.