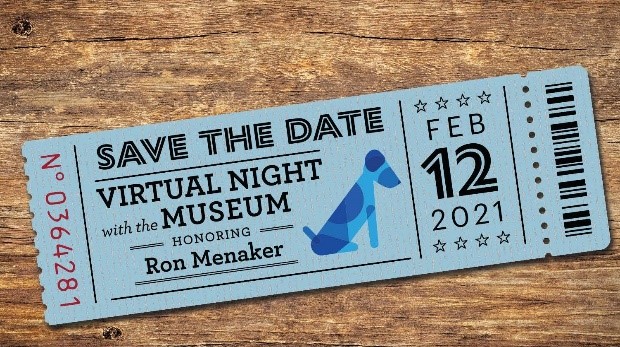 From The Dog Lady’s mailbag: The AKC Museum of the Dog is excited to announce “Virtual Night with the Museum,” a livestream virtual gala honoring the Museum’s longtime friend, supporter and board member Ronald H. Menaker on Friday, February 12 between 8pm -9pm.

For almost three decades, the Theatre Benefit for the Museum has been Menaker’s passion project and the Museum hopes to continue the tradition virtually with a night of celebrating and showcasing our love of dogs and the Museum’s impact on the community.

Mr. Menaker first served on the AKC Board from 1996 to 1998. Elected again in 2000, he became Vice Chairman in 2001 and served as Chairman since March 2002 until April 2019. He has been actively involved in the sport of purebred dogs for more than 40 years and has contributed to it greatly through his work with fundraising, particularly hosting the annual Theater Benefit.

The Theater Benefit has fundraised thousands of dollars for AKC affiliates such as the Humane Fund and now more recently, the AKC Museum of the Dog. In addition to hosting the Theater Benefit, Ron has also donated several pieces of artwork to the Museum, including At the Garden Gate by Matilda Lotz, Portrait of Bea Godsol by John Dwight and The Intruder by Arthur Wardle.

Open to the general public, the virtual gala will include remarks from Museum Executive Director Alan Fausel, testimonials from community members on the Museum’s impact and a silent auction. Individuals also can become an Event Sponsor. With a gift of $1,000 or more, participants can become a Bronze, Silver, Gold, or Platinum Level Sponsor. Sponsors at levels Silver and above will receive a medallion on our Capital Campaign Wall. Supporters at all sponsor levels will receive recognition on the MOD Donor Wall in the Museum, in pre- and post- show content, and a dedicated space on our giving center within the sponsor level and mentions throughout the live event.

In addition to sponsorship, guests will also be able to bid in a live auction during the event for a chance to take home fabulous prizes in support of the Museum. Those who prefer to give directly can do so through the Museumofthedog.org website on the Night with the Museum Fundraising page.

Parent club members are encouraged to participate in the livestream event through Champions for Our Cause, a competition open to AKC clubs encouraging giving together as a team. The highest total amongst club teams will earn recognition on our AKC Clubs Wall of Fame. This dedicated space in the Museum will feature a plaque with the club’s name on it, to honor the club’s legacy and lasting support of the Museum.

“At the Museum of the Dog, we want to take this opportunity to honor Ron Menaker as being an integral part of the museum’s development and sustained success,” said Alan Fausel, Executive Director of the Museum. “He has been the glue that has held our institution together, and we wish to follow his example as we work towards a brighter and stronger 2021 for all museum visitors.”