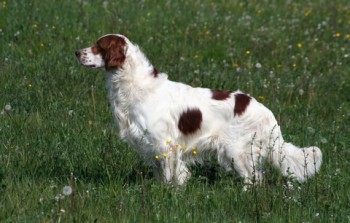 If you paid careful attention during the broadcast of the National Dog Show on Thanksgiving Day, you may have noticed that the American Kennel Club has approved three new breeds, bringing the total number of recognized breeds to 162.

The three new breeds are the Irish Red and White Setter, the Norwegian Buhund and the Pyrenean Shepherd.

The Irish Red and White is part of the Sporting Group.  This breed looks very similar to the conventional Irish Setter, except for the coloring.  However, the breed is sufficiently different to warrant recognition as a separate breed, rather than a variety of the Irish Setter.  Originally bred in 17th century Ireland as a hunting dog, the Irish Red and White was nearly extinct by 1900, but careful breeding efforts revived the breed by the 1940’s.  These dogs were eventually exported to the United States, where they have now been added to the official ranks of AKC breeds.  For more information, click here.

The Norwegian Buhund started its history as a farm dog companion of the Vikings.  The breed is capable of herding, guarding, and hunting, but is classified as a member of the Herding Group.  This dog is medium-sized and descends from the Spitz family, which also gives us the Chow-Chow, the Husky, and the Akita.  Like other Spitzes, the Buhund carries his beautifully plumed tail curled over his back.  For more information, click here.

The Pyrenean Shepherd is also a member of the Herding Group.  This dog may also be known as Berger des Pyrenees or Pyr. Shep.  Smaller than the Great Pyrenees, the two breeds often work together to help shepherds in their everyday tasks.  The long, lean body of this breed shows off the dog’s natural athleticism.  For more information, click here.