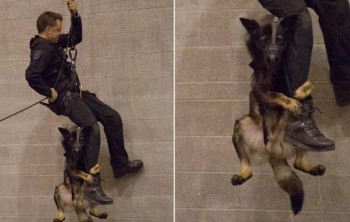 The Vancouver Police Department raised more than a few eyebrows recently when their Facebook photo of a K-9 team rappelling down a building face went viral. The caption read, “Hey dad… This rappelling? Yuh, I’m not a fan.” In Canada they are called Police Service Dogs rather than K9s, and this dog is named PSD Niko.
END_OF_DOCUMENT_TOKEN_TO_BE_REPLACED