We know your time is at a premium, and you have to make choices about what to watch on TV. HereÆs our guide to the best dog-related shows on Animal Planet to help you sort out whatÆs good from whatÆs not worth your TiVoÆs time. 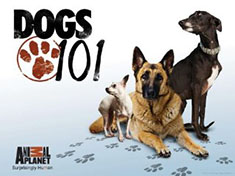 Dogs 101 is a visual encyclopedia of dog breeds.

This 1-hour show is a basic tutorial on breed characteristics. Each episode profiles three or four breeds, discussing temperament, grooming requirements, exercise needs, and history. Expert trainers and veterinarians offer comments about the dogs, often doing voice-overs while pictures of the dogs playing or working are shown. They also speak to several people who live with each breed to get personal stories that demonstrate the dogÆs abilities and foibles. ItÆs the video equivalent of our doggies.com breed guides.

HereÆs what Animal PlanetÆs promotional department wants you to know about the show:

Dogs 101 is a visual encyclopedia of dog breeds celebrating a variety of fascinating facts surrounding manÆs best friend. With over 800 types of dog recognized worldwide, the spotlight will fall on the adorable, the feisty and the unexpected. From labrador retrievers and poodles, to beagles, dachshunds and chihuahuas you will learn everything you ever wanted to know about these animal companions.

As the title implies, Pit Boss is a show about Pit Bulls, but itÆs so much more than that. The star of the show, a little person named Shorty, runs a talent management company for others of short stature with three of his friends. In their spare time, they rescue Pit Bulls. This one-hour drama thatÆs often funny is as much about the lives of the humans as it is about dogs, and it is definitely entertaining.

Former actor, entertainment guru and pit bull rescuerĀShorty RossiĀhas lofty ideals, a tough attitude and an entertainment industry Rolodex to help his cause. And he's gathered together three friends/employees; Ronald, Ashley and Sebastian, to take on the gargantuan task of rescuing, rehabbing and training the most misunderstood of dogsŚpit bulls.

Pit Boss follows the everyday drama and joy of these buddies and business partners as they hit the streets of Los Angeles in their fight to overcome stereotypesĀŚfor themselves and the pit bulls they save. 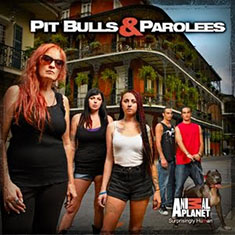 Pit Bulls & Parolees follows the drama and bittersweet moments as ex-convicts and ill-reputed dogs come together.

Another one-hour drama about Pit Bulls, this one centers on Villalobos, the 10-acre rescue center run by Tia Torres outside of Los Angeles. Torres focuses on second chances, both by rehabilitating Pit Bulls and by placing them with recent parolees from the justice system.

From the showÆs web site:

Pit Bulls & Parolees follows the turbulent drama and bittersweet moments as ex-convicts and ill-reputed dogs come together to strengthen one another. Sharing the same dominant traits of a pit bull Ś determination, agility, strength and energy Ś Torres has the power to make a positive change for the prison community and the dog world. Watch as one woman pulls the weight of 1,000 men to fulfill her dream of saving pit bulls from dangerous situations and giving parolees a chance to repair their reputations and their lives.

Have you ever struggled to get your dog to obey your commands? British trainer Victoria Stillwell feels your pain. Just like SuperNanny, she visits misbehaving dogs and their families to suggest a training regimen that just might get them to listen this time.

HereÆs the information Animal Planet wants you to know:

World renowned British dog trainer Victoria Stilwell comes to the rescue of dog owners whose homes have been destroyed and relationships stretched to breaking point by their disobedient canines. From unruly hounds to pampered pooches, Victoria has seen it all. Journeying across the Atlantic, Victoria now brings her unique approach with dogs to American families. Through observation, interviews and secret filming with a 'pet cam', Victoria uses her 20 years of expertise to help the animals and their owners, restoring harmony to their homes. 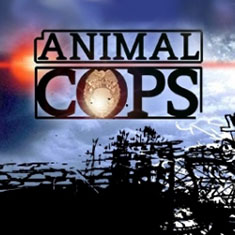 Animal Cops follows the men and women who investigate cases of animal cruelty.

Although this show isnÆt specifically about dogs, it does feature a bunch of them. Cameras follow animal control officers in San Francisco, Houston, and Detroit as they dispatch their daily duties. They round up abused and neglected animals, take them for medical treatment, and appear in court on the animalsÆ behalf. ItÆs nice to see that justice is at least sometimes meted out to those who donÆt take their responsibility to their pets seriously.

Animal Planet has this to say about this docu-drama:

Follow the hard-hitting men and women of Animal Cops as they take a bite out of animal cruelty. This animal welfare series follows the men and women who investigate cases of animal cruelty; rescue sick and abused animals and fight for justice on their behalf. Hundreds of thousands of animals are rescued each year from coast to coast and it is the Animal Cops mission to give hope and create happy endings out of tragic situations.

This looks like it will be an awesome new show this winter and spring. It follows dogs who work with police and the military, highlighting their training and extra special abilities. Watch for the premiere on February 21, 2014 at 8 pm.

Last but not least, we couldnÆt finish this article without mentioning the annual Puppy Bowl. This special programming, shown once a year on Super Bowl Sunday, features puppies playing on an Astro-Turf mat painted to look like a miniature football field. Sure itÆs a hokey concept, but itÆs also cute beyond belief. The ōgameö shows the pups playing with various toys, as well as with each other. They have a kitty half time show, and even a ōwater bowl camö. The announcers give a play-by-play accounting of the puppiesÆ antics.

ItÆs not meant to be heavy drama, but it does give you something to do while youÆre preparing your hors dÆoevres for the big game-day party. The really cool thing is that all of the puppies shown on Puppy Bowl are from rescue organizations. Puppy Bowl starts in the late afternoon each year on Super Bowl Sunday, and is re-run several times before and even during that other football game.

HEALTH Summer is coming on fast, so itŌĆÖs time to plan how you will keep your dog safe and healthy through the lazy, carefree, warm days.

DOG FUN Walking your dog is not only crucial to keeping him healthy and happy, it strengthens the bond between your canine friend and his caregiver. There are a lot of obstacles out there. DonŌĆÖt forget these simple tips to keep your walk fun and safe in the outside world.

HEALTH The same techniques that physiotherapists use to treat a variety of injuries and conditions in humans have been adapted to suit animals with great success. Family pets, show dogs, and working dogs can all benefit greatly from physiotherapy.┬Ā Dogs whose activities involve a lot of agility are especially susceptible to the types of problems that physiotherapy can address.

FIRST TIME OWNERSBringing a dog into your family is a decision where many people donŌĆÖt realize itŌĆÖs magnitude until after they have the dog. There are a number of things that you need to research before you decide to purchase a dog, and it starts right in your own home.

HEALTH Many believe that a dog and a new baby cannot happily coexist, so therefore the dog has to go.┬Ā This is not necessarily the case. ┬ĀA new baby does not mean you have to abandon your dog.

Your DogŌĆÖs Digestive System
PHYSIOLOGYEver wonder why your dog eats so fast? Or why he eats gross things? Or why he gets sick to his stomach? Or why his waste stinks so bad? Some of these things are normal, some are not.

Top Ten Tips for Living with a Senior Dog
DOG HEALTH Bringing home a new puppy is so exciting, but it doesnŌĆÖt take all that long for your exuberant puppy to grow into a senior dog who may have special needs. Here are the doggies.com top ten tips for taking care of your companion who has been with you through so much.