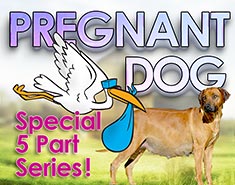 Canine pregnancies are very unlike human pregnancies. For example, human females become fertile every month, while dogs typically go into heat only twice per year. Bitches (female dogs, not nasty female humans!) may start having heat cycles as early as 4 - 6 months of age for small breeds or at 12 - 24 months of age in larger dogs. Each individual fertile period lasts 7 - 10 days, depending on the breed of dog. Dogs never reach menopause, so you could experience a dog pregnancy even in a very old bitch.

There is no blood or urine dog pregnancy test that can be used, as the hormonal changes a dog goes through are relatively similar whether the dog is pregnant or not. Therefore, you have to rely on symptoms of dog pregnancy, at least initially. Knowing when the dog mated will help you a great deal, but if you did not see the blessed event, you can still use this guide to pregnant dog symptoms to get a good idea of if your dog is pregnant or not.

For about the first month, you likely will not see many outward dog pregnancy signs, as the changes inside your dog are microscopic. About 2 - 3 days after mating, the eggs are fertilized on their way to the uterus. At 10 or 11 days, the fertilized eggs implant themselves in the uterine lining.

The first symptom of dog pregnancy you are likely to notice occurs at 14 to 15 days after mating. If you look closely at the dog's nipples, you will see that they are becoming larger and turning a darker shade of pink. At about 20 days, the fur around the nipples will begin to thin out to allow the pups easier access to them. 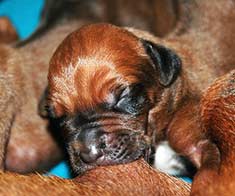 One of the most visible symptoms of dog pregnancy is present from days 21 – 28, when the bitch goes through morning sickness, similar to what human mothers experience in early pregnancy. Although dogs don't typically vomit as much as humans, they often lose their appetites and refuse to eat.

By 25 days after mating, you can notice one of the most important dog pregnancy symptoms - heartbeats! If you have access to a stethoscope, press it gently against the dog's abdomen and listen closely. You probably won't be able to pick out how many puppies are in there, but it's exciting to hear the little thumps, nonetheless.

By 30 days after mating, the embryos are big enough to be felt through the dog's abdominal wall. They will be about walnut-sized and can be felt well enough to determine how many puppies are in your pregnant dog. A dog pregnancy ultrasound can be taken at this point to verify the pregnant dog's litter size. Symptoms at this point are pretty easy to spot, as the dog's abdomen is rapidly growing.

Other dog pregnancy symptoms are swollen nipples and restlessness. Your dog may spend a lot of time grooming herself and may wander around, sniffing for places that would make a good den.

After six weeks, the puppies will be large enough that they begin crowding each other and squirming around. If your dog will allow you to touch her stomach, you can feel them, just as you would a kicking baby. The abdomen will feel hard and will be extremely large and stretched. At this point, the bitch may lose her appetite entirely, as her stomach will be crowded with puppies, leaving little room for food. 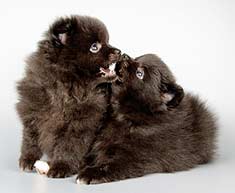 Puppies are a lot of fun, so enjoy your new pack members!

When does a dog pregnancy end?

Most dogs deliver their litters about 54 - 72 days after conception. A few days before the delivery, the key pregnant dog symptom is that her nipples will leak a milky fluid when squeezed. She may also have a clear discharge from her vagina. You should begin taking rectal temperatures twice a day when you see discharge from either place. When the temperature drops from 101 to 98 degrees, the dog will begin delivering within 12 - 24 hours, and your dog pregnancy will be at an end.

HEALTH Summer is coming on fast, so itā€™s time to plan how you will keep your dog safe and healthy through the lazy, carefree, warm days.

DOG FUN Walking your dog is not only crucial to keeping him healthy and happy, it strengthens the bond between your canine friend and his caregiver. There are a lot of obstacles out there. Donā€™t forget these simple tips to keep your walk fun and safe in the outside world.

HEALTH The same techniques that physiotherapists use to treat a variety of injuries and conditions in humans have been adapted to suit animals with great success. Family pets, show dogs, and working dogs can all benefit greatly from physiotherapy.Ā  Dogs whose activities involve a lot of agility are especially susceptible to the types of problems that physiotherapy can address.

FIRST TIME OWNERSBringing a dog into your family is a decision where many people donā€™t realize itā€™s magnitude until after they have the dog. There are a number of things that you need to research before you decide to purchase a dog, and it starts right in your own home.

HEALTH Many believe that a dog and a new baby cannot happily coexist, so therefore the dog has to go.Ā  This is not necessarily the case. Ā A new baby does not mean you have to abandon your dog.

Your Dogā€™s Digestive System
PHYSIOLOGYEver wonder why your dog eats so fast? Or why he eats gross things? Or why he gets sick to his stomach? Or why his waste stinks so bad? Some of these things are normal, some are not.

Top Ten Tips for Living with a Senior Dog
DOG HEALTH Bringing home a new puppy is so exciting, but it doesnā€™t take all that long for your exuberant puppy to grow into a senior dog who may have special needs. Here are the doggies.com top ten tips for taking care of your companion who has been with you through so much.