Dog Fighting- It is Not New 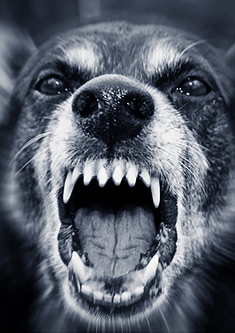 Sadly, this terrible "sport" as many inhumane people call it has gone underground.

Dog fighting is nothing new. In fact, its origins in the United States can be traced back to as early as the 1750s, and it became widespread after the civil war. Dog fighting used to be a sport meant to entertain police officers and firefighters, and was advertised in police gazettes.

Now that numerous laws have been passed that make dog fighting illegal, the sport has simply gone underground. The ASPCA reports that the practice is still wide-spread, involving as many as tens of thousands of people in all areas and settings (urban, suburban, and rural) throughout the country. Dog fighting is most likely to thrive in areas where enforcement of the existing laws is weak.

People participating in dog fights may also be prosecuted for illegal gambling. Arguments over a dog fight can lead to other violence-related charges. In addition, the sport appears to attract those who have drug, alcohol, weapons, and probation issues.

Law enforcement officials designate dog fights in three different categories. Informal street fights have no rules and are generally spontaneous fights in reaction to insults or gang turf invasions. The dogs are often starved or beaten to encourage aggressive behavior. After a fight, the injured dogs are simply left in the alley or on the playground to die.

Hobbyist fights are more organized, and a dog is expected to perform in successively bigger fights throughout the year. The dogs are carefully bred and trained for aggression. These fights often cross state lines.

Professional dog fights involve people who earn money from breeding, selling and fighting their dogs. One owner may control 50 or more dogs at a time. The bloodline of a fighting dog is important, and the animals undergo long-term conditioning as any athlete would.

Unsuccessful dogs are often brutally killed, and those who are aggressive to humans are sold to street-level fighters. This contributes to the problem of dog bites from pit bulls and can lead to breed-specific laws. 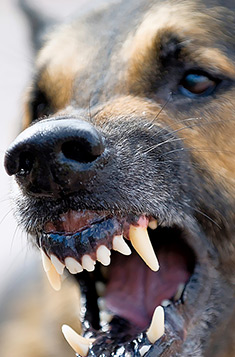 Although the average street fight win results only in pride or street credibility, hobbyists and professional dog fights can net thousands of dollars for the winners. Major raids have netted seizures of more than half-a-million dollars per fight event. Income is gained from gambling, stud fees, and puppy sales, making it a very lucrative field.

What happens at a dog fight?

Most often, a fight takes place in a pit area enclosed by anything thatís handy ñ hay bales, plywood, and chain link are popular materials. The floor is either dirt, wood, or sawdust. Scratch lines in opposing corners mark the starting position of the dogs.

As fights get more sophisticated, such as at the professional level, dogs are divided into weight classes. Some owners put chemicals on their dogsí coats to deter or harm the opposing dog, so the dogs are often washed just before the fight.

The dogs are released from their corners and meet in the center of the ring, where they grab onto each other and shake to inflict the most damage possible. A dog who turns away from the fight several times is declared the loser, and may be killed or left to die.

What can be done about dog fighting?

Laws of any kind cannot be enforced without the help of citizens. If you see something, report it to your local law enforcement or animal control authority.

The ASPCA recommends that local or state task forces be organized to identify problem areas, develop a plan as to which laws will be used to fight this crime, and pinpoint resources which can be used in a collaborative approach to dog fighting. The task force should contain a cross-functional group of people from organizations such as law enforcement, animal control, animal welfare groups, veterinarians, public health officials, housing authorities, neighborhood watches, and other interested stakeholders.

Dog fights are highly secretive in nature, and very difficult for law enforcement officials to infiltrate for investigation. In addition, once a dog fight is raided, someone must take responsibility for the dogs recovered. This often taxes community resources and serves as a deterrent to investigation and prosecution of these heinous crimes. 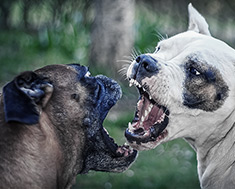 Ironically, dogs bred to fight are (obviously) very aggressive to other dogs; however, they are usually friendly to people.

What happens to the dogs seized from a dog fight?

Dogs bred to fight are (obviously) very aggressive to other dogs; however, they are usually friendly to people, to allow for them to be easily handled during fights. Every dog seized from a fight should be thoroughly evaluated by a professional dog behaviorist. Testing should include an assessment of the dogís reaction to common events such as meeting new people, playing with toys, having a bowl of food taken away, meeting other dogs, and interacting with children. The child interaction is usually simulated with a doll to prevent the possibility of injury.

The dogs are typically placed in shelters or foster homes where the people are familiar with their history and can carefully monitor the dog for signs of future aggression. Once a dog is deemed rehabilitated and safe for family interaction, they are made available for adoption.

Seized dogs are often stolen from foster / adoptive homes or shelters so they can be returned to fighting, making it important that caregivers be discreet as to the origins of their dogs.

Express your thoughts in comments or facebook on this very disturbing subject.

HEALTH Summer is coming on fast, so it‚Äôs time to plan how you will keep your dog safe and healthy through the lazy, carefree, warm days.

DOG FUN Walking your dog is not only crucial to keeping him healthy and happy, it strengthens the bond between your canine friend and his caregiver. There are a lot of obstacles out there. Don‚Äôt forget these simple tips to keep your walk fun and safe in the outside world.

HEALTH The same techniques that physiotherapists use to treat a variety of injuries and conditions in humans have been adapted to suit animals with great success. Family pets, show dogs, and working dogs can all benefit greatly from physiotherapy.¬Ý Dogs whose activities involve a lot of agility are especially susceptible to the types of problems that physiotherapy can address.

FIRST TIME OWNERSBringing a dog into your family is a decision where many people don‚Äôt realize it‚Äôs magnitude until after they have the dog. There are a number of things that you need to research before you decide to purchase a dog, and it starts right in your own home.

HEALTH Many believe that a dog and a new baby cannot happily coexist, so therefore the dog has to go.¬Ý This is not necessarily the case. ¬ÝA new baby does not mean you have to abandon your dog.

Your Dog‚Äôs Digestive System
PHYSIOLOGYEver wonder why your dog eats so fast? Or why he eats gross things? Or why he gets sick to his stomach? Or why his waste stinks so bad? Some of these things are normal, some are not.

Top Ten Tips for Living with a Senior Dog
DOG HEALTH Bringing home a new puppy is so exciting, but it doesn‚Äôt take all that long for your exuberant puppy to grow into a senior dog who may have special needs. Here are the doggies.com top ten tips for taking care of your companion who has been with you through so much.