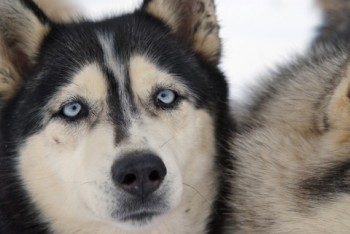 Any of you who study the science of exercise know that experts recommend you do different types of exercise or work out only every-other day to prevent muscle damage.  So, how do sled dogs compete in the 1,100 mile Iditarod Trail Sled Dog Race from Anchorage to Nome, Alaska, which spreads over nine days?

Michael Davis of Oklahoma State University‘s Center for Veterinary Health Sciences has studied the sled dogs for the past 10 years, before, during, and after races both in the lab and in the field.   His findings may even have implications for humans.

It seems that when we exercise, both human and dog cells shed enzymes and proteins into the bloodstream, indicating that there has been damage to the muscle cells.  In humans, further exercise results in further cell damage and more protein shedding.  In sled dogs, however, the cells are re-programmed after the first day so that more exercise does not cause more cell damage.

Although scientists aren’t sure how this happens, they are very interested in sled dog metabolism because of the potential benefits it may provide to humans.  The biggest value may come when they look at the diet of sled dogs which can include as much as 12,000 calories per day, of which 60 – 70% is fat.  This high calorie consumption is about equivalent to that of an Olympic athlete weighing 2 – 3 times as much as a 60 pound sled dog.

If a human were to eat such a high fat diet, it is likely that type 2 diabetes wouldn’t be far behind.  However, dogs do not have any such problem.  The question becomes why, and how can this be applied to humans?