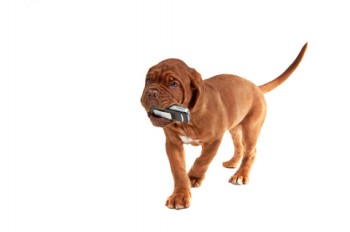 Have you ever misplaced your cell phone, then had to call yourself to find it?  Of course, that’s not so easy when the phone is set to vibrate!  But not to worry; apparently all cell phones contain a substance that gives off a particular odor that your dog can smell.

Prison authorities aren’t saying what that substance is, but they’re putting it to good use.  The Departments of Corrections in Maryland, New Jersey, and Virginia are now using trained dogs to locate contraband cell phones that have been smuggled into prisons.

In the 18 months since Maryland started using dogs for this purpose, corrections officers have confiscated 133 cell phones, 128 chargers, and numerous earpieces.

Training for the dogs can be accomplished in just six weeks, and removing the cell phones from the prisons helps keep inmates from continuing their criminal activities from their jail cells.

Inmates often have their friends smuggle cell phones into prison during visits.  The phones are hidden inside food boxes, books, shoes, or anywhere else they will fit.  If an inmate doesn’t have a use for a phone, he can sell it to his friends for as much as $400!

Now, if only I could get my dogs to find my car keys!

2 thoughts on “Can Your Dog Find Your Cell Phone?”