Free performance of Billy Elliot: The Musical? Why can’t I be a service dog in training?

CNN.com is reporting on a group of future service dogs who attended a relaxed performance designed for those sensitive to lights and sounds at the Stratford Festival. END_OF_DOCUMENT_TOKEN_TO_BE_REPLACED

Sully, President George H.W. Bush’s service dog, had a big February! He got to meet his namesake, pilot Chesley Sullenberger, on the Today Show, then he started his new job as facility dog at Walter Reed. END_OF_DOCUMENT_TOKEN_TO_BE_REPLACED

The responsibility of a service dog never ends. This is Sully, President George H.W. Bush’s service dog. Sully came to the President from America’s Vet Dogs and assisted Bush in recent months, after he lost Barbara and was confined to a wheelchair.

This photo was taken at the funeral home in Houston the night before the casket was transported to Washington to lie in state in the Capitol. It was first published on Twitter with the caption “Mission Complete #Remembering41.”

America’s Vet Dogs will take Sully back for some retraining, then will place him in the dog program at Walter Reed National Military Medical Center, where he will assist wounded soldiers and active-duty personnel.

Earlier today, I posted a picture of Endal. With a little more research, I was able to find…the rest of the story. From NatGeo Wild:

I found a new page on Facebook, by RearFront. I’m not totally sure what it’s all about, but I loved these two service dog photos they recently featured. 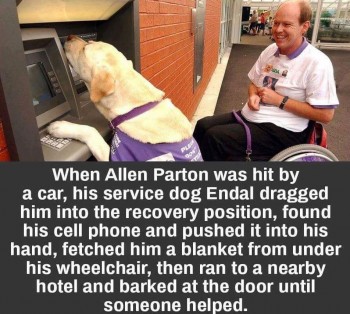 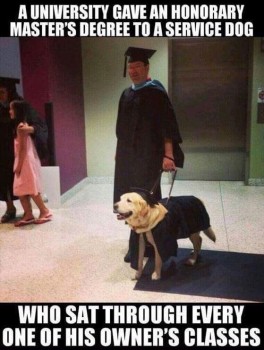 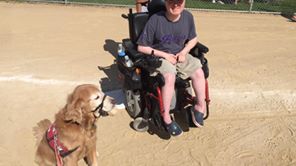 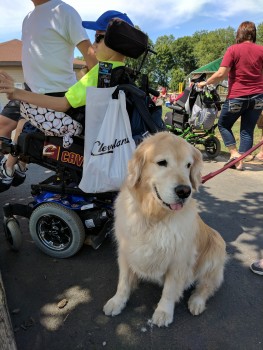 Spotted at this weekend’s annual Challenger Baseball State Tournament in Ohio: Tommy (top) and Hero (below), both service dogs assisting their athletes on the diamonds in Parma, Ohio. What a great weekend for baseball and for dogs!

Great thanks to NEO Challenger for putting on a fabulous tournament!

When students at Stafford County High School received their yearbooks this year, they found the face of one of their classmates, Alpha. Think that’s a funny name for a student? Not when the student is a dog. END_OF_DOCUMENT_TOKEN_TO_BE_REPLACED 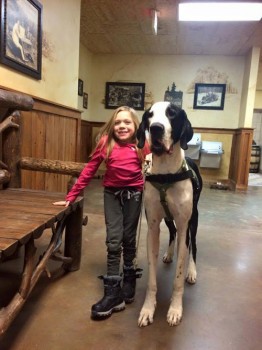 Rachel Burton of Woburn, Massachusetts brings us George, from the Service Dog Project which trains dogs to help the mobility impaired. The Great Dane was paired with Bella, a 10-year-old girl with a rare genetic disorder called Morquio Syndrome. This disorder makes mobility exceptionally difficult and requires Bella to undergo many operations. END_OF_DOCUMENT_TOKEN_TO_BE_REPLACED 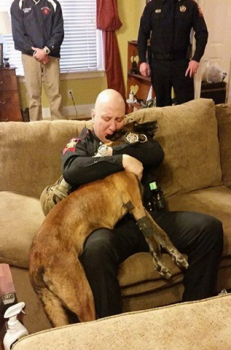 To celebrate the dogs that do extraordinary things for their human counterparts, the AKC Humane Fund is seeking YOUR nominations for its AKC Humane Fund Awards for Canine Excellence (ACE). Nominations open today, April 1, 2015 and winners will be announced summer 2015.
END_OF_DOCUMENT_TOKEN_TO_BE_REPLACED 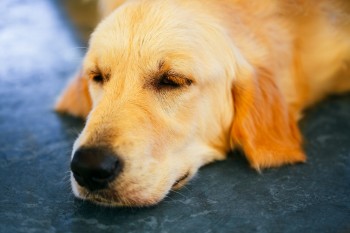 In a somewhat innovative move, Family Court Judge Jim James (Stark County, Ohio) has announced his plans to apply for a court dog from Canine Companions for Independence. Classified as a “facility dog”, the canine would be made available to both prosecution and defense teams to offer emotional support to people who are testifying in stressful cases.
END_OF_DOCUMENT_TOKEN_TO_BE_REPLACED