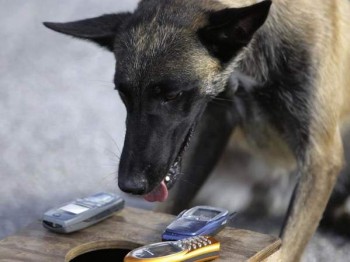 How’s this for a specialized job?  We’ve all heard of dogs who sniff out drugs at the airport, or who look for climbers after an avalanche, but Razor, a Mallinois employed by the Florida Department of Corrections, is trained to find cell phones!

I didn’t know smuggling cell phones into prison was such a big problem, but apparently, prisoners use them to arrange escape attempts, harass victims and make drug deals both inside and outside of the prison walls.  They confiscated just under 350 cell phones last year.

Previously, when prisoners were caught with contraband such as cell phones, PDAs, or pagers, they lost privileges or had their sentences restored to the original length after they had been shortened for good behavior.  But now, a new law makes having a cell phone in a prison illegal, and punishable by up to five years in prison and a fine of up to $5,000.

For more pictures of Razor doing his job, check out the Detroit Free Press’ coverage of this story, which also includes other dogs at work.

One thought on “Specialized Training for Dogs”