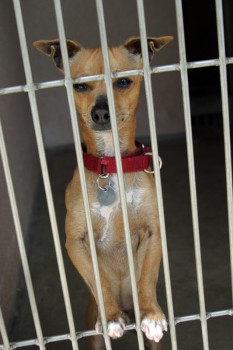 From the Hamilton, Ohio Journal News:  Project Free Inmate Dog Obedience (FIDO) is matching dogs from the humane society to prisoners at the Butler County Jail for obedience training.  The prisoners are screened to make sure they have not abused animals, then they are matched to a dog from the shelter.

In phase one of the project, prisoners were sent to the humane society to clean cages, but now the dogs are sent to live at the jail with the prisoners.  Although similar programs exist in state prisons, this program is believed to be the first of its kind in a county jail.

The prisoners get a sense of accomplishment, seen as a therapeutic benefit for them, while the dogs get a better chance of being adopted because they are already obedience trained.  The shelter benefits because cages are freed up for future drop-offs and strays.

Training will be facilitated by the Hamilton and Queen City dog training clubs, and the dogs will be featured on the shelter’s web site.  There is already a waiting list for the dogs.

See the Sheriff’s blog post about this program here.

What a great example of different county agencies working together to benefit both!  A wag of the tail to Hamilton!