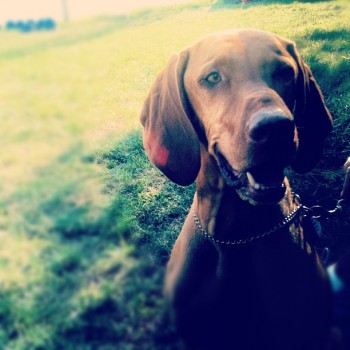 We took Cooper to the kids’ softball game last night. Friend-of-the-blogger Lisa Doyle snapped this picture of him while he was begging for her cheese popcorn. It turned out to be such a cute portrait of him, I had to share it, but I also have another point to make about the outing.

Cooper doesn’t often get to ride in the car, so we don’t have the proper harness / restraint for him. (You can all yell at me later.) Anyways, I opened my window so he could catch all the smells as we went down the road. He took that as an invitation to sit on my shoulder – with his butt in my face, of course – so he could stretch out his neck to the longest possible length.

I’ve never understood why a dog thinks they have to move forward faster & faster so they get to the new smells sooner. They pull when we walk them, and they try to get their noses out ahead of the car. Do they really think the smells are going to change in the extra few seconds it would take to get there if they didn’t make these extraordinary efforts?