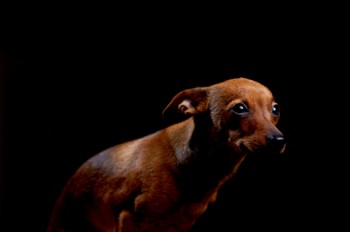 You know the symptoms: your dog starts to whine or tries to dig a hole in the carpet. He might shed excessively or become Velcroed to your lap. The ears are back, and the tail is between the legs. When your dog is scared, you know it, but you might not always know what the dog is reacting to. Here are the top ten things dogs have phobias about:

10. Men: The reasons aren’t entirely clear, but many dogs are afraid of men. It probably has something to do with the deeper voice or the perceived domination of the male of most any species.

9. Strangers: Although your dog undoubtedly has good instincts about whom to trust, a generalized fear of all strangers can be troublesome. If your dog reacts badly to only certain people, you might be wise to pay attention, but if he or she is hinky around every new person, it’s probably due to a phobia.

8. Children: Usually, a fear of children results from bad experiences with children. Whether a neighbor child has been rough with your dog or previous owners didn’t take the time to socialize their children to the dog, your dog likely has good reasons for treading lightly around the wee ones.

7. Stairs: Many dogs are fearful of open staircases – those with open treads or with open sides. You can often solve the problem by putting up a barrier of some kind over the open spaces. When my dog refused the basement stairs, we simply put up a cheap lattice work, spray-painted to match our decor, along the open side of the staircase. Problem solved. You might also make sure the surface of the stairs isn’t too slick for your dog to maintain good traction. Also, older dogs might refuse steps when their joints become too arthritic to handle them.

6. Car Rides: Although most dogs will ride along in the car, head hung out the window, ears blowing in the wind, and nose going a thousand sniffs a second to pick up all of the enticing smells in the wind, some dogs are terrified of the ride. This can stem from the fact that the only place the car ever takes them is to the vet, or it may be a fear of simply not being in control of where they are going.

5. Specific objects: Whether it’s the vacuum cleaner, a wall decoration, or a child’s toy, many dogs have irrational fears of a specific object. It could be the noise that sets them off or just the fact that something new has been introduced to their environment. We had an African mask hung on the wall that drove my Vizsla absolutely crazy! I think it was the eye holes. We finally had to take it down to get any peace.

4. Veterinarians: I don’t know of any dogs who are actually chomping at the bit to go to the vet, but for some dogs this fear rises to the level of a true phobia. It could be due to the smell of the office or the poking and prodding that usually accompanies a visit to the vet.

3. Being left alone: Otherwise known as separation anxiety, many dogs have just an awful time adjusting to life without the constant company of their humans. Dogs have always been pack animals, and many simply cannot function well without the pack.

2. Fireworks: For something that happens only a few times a year, it’s hard to believe dogs could be so scared of them. And the fireworks don’t even have to be close to draw out the fear. Our local fireworks show is over three miles away from our house, but the dogs still go nuts when they hear them.

1. Thunder: There’s no escaping the occasional thunderstorm, and many dogs react very badly to them. It’s unknown whether it’s the actual noise of the thunder or the change in atmospheric pressure that accompanies storms.

So what can you do if your dog has any (or, God forbid, all) of these phobias? Come back tomorrow for some suggestions on overcoming phobias, or at least making it a little less stressful for your dog.