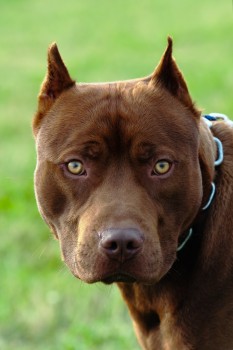 It took me a long time to decide whether or not to write this. But it is legitimate news, so I’ll share. My sister works in a boarding facility for dogs in Virginia. When she was cleaning a cage last week, she forgot to put the dog’s bedding back inside, and as she opened the cage to do so, the dog was being brought back in from an outdoor run.

Apparently, he didn’t like the fact that my sister had her hands in his cage, so he bit her – really badly. I won’t share the pictures because they’re REALLY awful. She was taken to the ER where they stitched it up, but that was apparently the wrong thing to do because two days later, she was in emergency surgery to open it back up so the infection could drain from her thumb joints. After three days, she was sent home and must now have 6 weeks of IV antibiotic therapy.

The reason I hesitate to share this? The dog is question is a Pit Bull. I absolutely hate that this breed was involved because it adds credence to the myth that Pit Bulls are somehow bad or too aggressive. This was apparently a well-behaved dog from a caring family who had been at the boarding facility for several days. Could it have happened with any other breed? Absolutely!

I don’t have any details as to the outcome for the dog, as obviously, my sister is not back to work yet.

Please keep my sister (and the dog!) in your thoughts. Such a shame this happened.