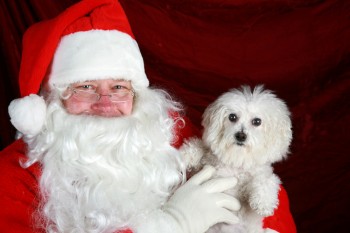 We’ve all seen them – those cute doggies sitting on Santa’s lap. But how does it feel for the dog? It’s getting to be that time of year when we need to think about stuff like this. (And can I just say I hate that I’m writing this in mid November – BEFORE Thanksgiving.)

We’ve only fallen prey to the madness once – before we had kids. We thought it would be a really cute idea to put a picture of the dogs in our Christmas cards. A great idea, in theory. However, back here in reality, the dogs were scared to death of this man who had this funky beard-ish thing wrapped around his face and held onto them like his life depended on it.

My recommendation? Take your pictures at home, with the snow or the Christmas tree as a backdrop. Your dogs will be much more relaxed and might give you better cooperation than you’ll get at the pet store.

Veteran photographers suggest that you take lots of pictures so you have several good ones to choose from. If possible, get yourself and your camera down to the same level as the dog so you don’t blow any body parts up out of proportion to the rest. (Remember the REALLY big dog nose shots that went around the Internet awhile ago?) Have a helper who can work with the dog, making sure the dog is relaxed, but alert for the photo.

Good training helps, too. It’s not like you can shake a favorite toy at the dog and NOT expect him to get up to play. Make sure your dog understands sit and stay before you get too involved in snapping the photos or you’ll be a frustrated train wreck.

If you have more than one dog, consider photographing each one separately, then using Photoshop to put them together or putting the individual shots into a collage.

2 thoughts on “Photos with Santa”