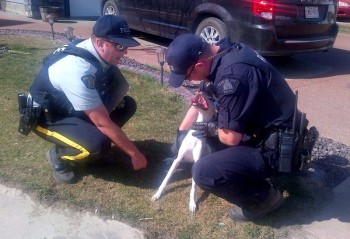 In advance of the quickly growing wildfire in Fort McMurray, Alberta, some people had to leave their pets behind as they fled to safety. CBCNews is reporting that hundreds of the animals have now been rescued.

According to the Facebook page of Fort Mac Fire – Pet Rescue, those who wished to help the animals informally were turned away by officials due to concerns that some might use the opportunity to loot abandoned homes.

However, Alberta SPCA and the Calgary Humane Society have been working with Wood Buffalo Animal Control Services to ferry the animals to an emergency holding facility, where they will be treated for smoke inhalation, dehydration, and other injuries from the fire. As of Monday, over 200 cats and dogs had reached Edmonton for treatment and reunification with their families.

RCMP Alberta is also assisting in the mass rescue and tweeted the above picture with the caption An appreciative Fort McMurray resident found our officers today. After a water break he was taken to animal control.

If you lost your animal during the fire, Wood Buffalo Animal Control asks that you fill out a form to aid in reunification. The location of the holding facility is not being released in an attempt to streamline the process.