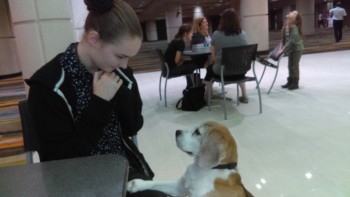 But, lest you think dogs are her whole life, Shannon is quick to point out she loves art, writing short stories and poetry, and photography. She has taken first place at the Florida State Fair with several of her photos. She also plays ukelele and piano, when she’s not busy running her blog about tumbling, called Jupiter Is Online.

Shannon is president of her 4H group, where she instructs others on rally, obedience, and conformation. Her favorite dog activities are agility and junior showmanship.

She has six dogs at home, including two adult beagles, two baby beagles (5 months old), a Basset Hound, and an Afghan Hound.

Gabriel, who is 9 years old wants to share that he loves his mom (Shannon), that the Beagle puppies drive him crazy, and that he will do anything for food. Shannon describes Gabriel as the alpha dog of the house, but says he will let the Afghan get away with a lot “because [the Afghan is] pretty dumb.” She says she thinks Gabe likes agility the best, but “barks his fool head off for lure coursing.”

I was familiar with most of the activities Shannon mentioned, except for the drag racing. The way she described it, I think drag racing is kind of like wiener dog races, only with other kinds of dogs.

I had fun meeting Shannon and Gabe at the 2016 AKC National Championship, and appreciate them taking a break from their very busy weekend to speak to me.