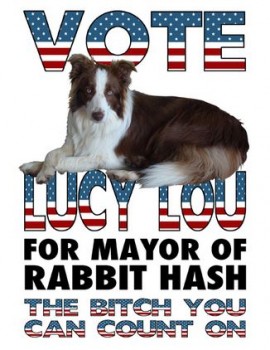 Sunday afternoon, settin’ a spell on the front porch of the General Store with Miss Katie, eating caramels and drinking iced tea. The mayor of Rabbit Hash is a pitbull named Brynneth Pawltrow; her vice mayor is a terrier named JackJack; and they’re both mighty friendly. Right before this, deep in the Kentucky countryside, we saw a camel. I’m not making any of this up.

At first I thought this was a joke, as Nick is normally a pretty funny guy, but when I went to post this, I thought to look it up.

The first elected mayor in Rabbit Hash history was Goofy Borneman- Calhoun, who was inaugurated in 1998 for a four-year term, after an election covered in the documentary Rabbit Hash (The Center of the Universe). He died in office in July 2001, aged 16.

The mayoralty remained unfilled until the next election, held in 2004, at which time Junior Cochran, a black Labrador, assumed office. Junior came under the scrutiny of the Northern Kentucky Health Department and was banned from entering the town’s General Store due to complaints. According to WXIX-TV on March 13, 2008, the dog’s owner would petition for an exemption for the “mayor”. On May 30, 2008, WXIX-TV reported that Junior had died in office.[8]

On August 31, 2008[9] a special election was held to fill the vacancy left by the tragic death of mayor Junior, and was won by Lucy Lou, a border collie, becoming the town’s first female mayor.[10] Mayor Lucy Lou shared a “Talking Points” walk with Bill Geist (CBS Sunday Morning), accepted a $1000 stimulus check from Reader’s Digest “We Hear You America Tour”, served as grand marshall of the Covington Paw-Rade, appeared in a segment of “The List”, and has placed 3 years in a row in the Best Elected Official category in Cincinnati CityBeat magazine’s Best Of Cincinnati issue (winning 1st place in 2013). On September 7, 2015, Mayor Lucy’s office announced that she is considering running for U.S. President,[11][12] and is the only mayor not to die in office.

On November 8, 2016 a mayoral election took place in Rabbit Hash. Brynneth Pawltro “Brynn”, a pit bull took first place having raised $3367 and is now the current mayor of Rabbit Hash.

Lady Stone, a border collie, came in third place raising $1621. Proceeds from the election go to the Rabbit Hash historical society and will help restore the Rabbit Hash General store.[Which has been in operation since 1831 and recently suffered a fire.]

In an unprecedented move, the Rabbit Hash Historical Society has given official positions to the 1st and 2nd runner ups, Bourbon and Lady, as Ambassadors to Rabbit Hash. In the case that the official mayor is unavailable for an event or obligation, the Ambassadors will fill in.

In 2001, after the death of Mayor Borneman, the post of mayor was left empty until the next election in 2004.

I may just have to move to Rabbit Hash!