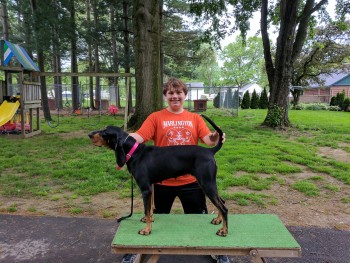 I spent Friday evening at a friend’s house so he could put new brakes on my car, and look at who I got to meet!

Their son, Tyler, I’ve featured before. He is burning his way through the junior show circuit, having earned several ribbons both in conformation and in hunting trials. He shows the family’s three Black and Tan Coohnounds, as well as a friend’s Treeing Walker Coonhound.

The Boxer, Abbie, wouldn’t come near me at first, but once she found out I had fingernails that felt pretty good on her rump, she became my best friend. Not sure what my son did to eventually win her over, but she liked him a lot, too!

And, (bonus!) my brakes sound much better now, too!