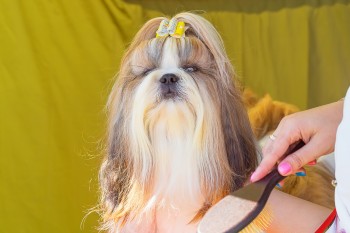 If you’ve never been to Westminster or even another major dog show, it can be pretty overwhelming. During the day, all events are being held at Piers 92 and 94, which are large empty rooms along the Hudson River. Westminster is such a big show, it takes up two of the piers.

In addition to typical dog show judging, today’s events include the 3rd Annual Masters Obedience Championship, where dogs and their handlers show their ability to respond to commands. And no dog show would be complete without hundreds of vendors showing their dog-related wares including leashes, coats, toys, pet waste containment systems, and everything else you can think of that relates to dogs.

But the main event is the judging of each individual breed, spread across several show rings. All of the dogs of each breed are ushered into their ring at the appointed time, and a judge looks them over, just the way you see on television for the night-time shows. The difference is that during the day time, all the dogs in the ring at one time are the same breed. Often, to the untrained eye, they look identical. I’m never sure how the judge chooses a definitive winner, but one lucky dog is chosen out of each breed.

I gotta say, I’m a little disappointed with the announcers on NatGeo Wild today. At the end of each breed, they ecstatically announce, “And we have a [breed] going to Madison Square Garden tonight!” They seem not to understand that there will always be a representative of each breed going to the Garden; the point is to announce WHICH dog won the breed.

But I digress…Winners from each breed advance to the group judging, which is what you’ll see on FS1 tonight. Dogs are broken into groups according to their function and size. Tonight, we’ll see the Hounds, Toy dogs, Non-Sporting dogs, and the Herding Group. One winner from each group will come back tomorrow night to compete against the winners of the Sporting, Terrier, and Working Groups for Best in Show.

If you ever get a chance to go to Westminster, it’s definitely worth the trip. Splurge and go the weekend before the show so you can see the Agility Championship and visit the Meet the Breeds booths. And make sure to stay at the Hotel Pennsylvania, which is right across the street from Madison Square Garden. You will get to see many of the competitors wandering the lobby, and it’s just a grand old-style hotel with a great history.

Come back tonight to find out who wins the first four Group competitions.